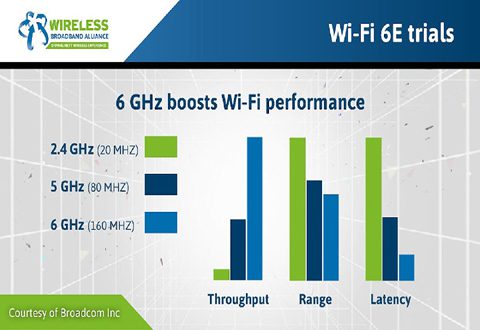 When the FCC approved opening up the 6GHz frequency band to unlicensed use on April 23, it was immediately clear from the comments of the commissioners that they expected that WiFi would be the major beneficiary. This was no surprise if only because the use of the band and WiFi have been intermingled for months during the discussion of the FCC’s pending action.

Now that the FCC vote has taken place, it’s only a matter of time before products are available in the U.S. that allow businesses and consumers to take advantage of the new frequencies. Chipsets already have appeared from a few manufacturers, and products that will use them have been designed. But it’ll still be awhile before you can actually buy a 6GHz WiFi access point and start using it.

But like other major changes in how technology is used, there are a number of factors and clarifications that are important to know. The first is to clear up the confusion between WiFi 6, WiFi 6E and 6GHz WiFi.

What are the differences between WiFi 6, WiFi 6E and 6GHz WiFi?

Briefly, WiFi 6 is a set of standards, also called 802.11ax, that define the latest protocols and signaling standards for WiFi. It supports multiple antenna use in a multiuser environment, it supports beam forming, and it allows faster communications. It’s common for a device and an access point using WiFi 6 to handle gigabit speeds, and WiFi 6 can run on any WiFi band, including 2.4GHz and 5GHz. WiFi 6 is available now.

6GHz WiFi runs in the newly allocated 6GHz band. It does not necessarily need to use WiFi 6. Older standards will operate at those frequencies as well, but they may not take full advantage of the greater bandwidth. WiFi 6E is WiFi 6 operating in the 6GHz band.

Because the 6GHz band offers space for so much wireless bandwidth—seven 160MHz channels—there’s plenty of room for very high speeds. Depending on the circumstances, you could expect to see speeds in excess of 10 gigabits per second. In addition, because of the relatively uncluttered frequencies, you can also expect to see very low latency.

“Generally speaking, it’s a massive increase in capacity,” said Andrew Zignani, wireless connectivity principal analyst at ABI Research and author of “The Future of WiFi.” “It’s an additional 1.2 gigahertz in additional spectrum. This increases the number of channels, it has less inherent congestion, [and it] won’t be interfered with by legacy devices. As a result, you can enable lower latency, more dense deployments and greater reliability. WiFi 6 adds better resource allocation.”

Much of the reason for the low latency is that there’s no legacy WiFi in the 6GHz bands to cause congestion. “In many enterprise environments, WiFi is tough to do because it’s so congested,” said Jack Gold, principal analyst at J. Gold Associates. Gold said he thinks the greatly expanded bandwidth will have a lot to offer to enterprise users. He said that may include having networks with a lot of video or sensor support, for example.

“If you can guarantee lower latency, you can do some safety-related stuff you couldn’t do otherwise,” Gold said. “Things like security and safety around machine tools; it’s virgin territory, and that helps a lot.”

Much has been said about the ways high bandwidth and low latency can go a long way to making virtual reality and augmented reality useful in the enterprise. Gold suggested that employee training would be a natural use for these capabilities. “People are trying to do 4K and 8K video streaming for things like security purposes,” he said.

If it’s deployed as many predict, 6GHz WiFi could make office communications truly immersive. Workers would no longer be restricted to their desks or excluded from some areas of the building because they’re near the lunch room or the elevators.

6GHz WiFi eventually will get crowded

But it’s not all clear sailing for 6GHz WiFi. There are existing licensed users currently in the band, and they plan to stay there. An unlicensed service such as WiFi is prohibited from causing interference to those users. This means that any WiFi devices other than low-power indoor devices will have to include an automated means of detecting the presence of licensed users, and if those are found, automatically change frequency or stop operating. Many of the licensees on those bands are asking the FCC to enhance the automatic signal detection to minimize interference.

In addition, unlike legacy WiFi, 6GHz WiFi is not a global standard, at least not yet. Currently the EU is studying the use of the 6GHz band and is expected to allow WiFi on at least part of it. Other parts of the world aren’t even studying it. This means you might not be able to use your 6GHz WiFi device anywhere except in the U.S., meaning mobile devices would likely have to retain their legacy WiFi capability.

In the enterprise, the limitations on 6GHz WiFi are unlikely to matter much. That means that this vast wireless bandwidth could grow like many hope it will, but the selection of devices may be more limited than if the use of 6GHz WiFi were truly global.