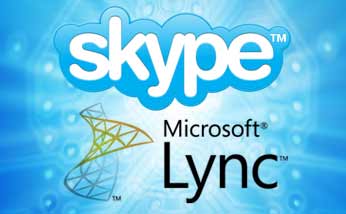 Microsoft has bridged its consumer and enterprise communications platforms, and slightly ahead of schedule to boot.

Skype and Lync users can finally call each other and participate in text chats without switching apps, the company announced. For now, Lync-Skype connectivity works only on the Skype desktop clients for Windows and Mac, but Microsoft assures that it is bringing the functionality to other platforms soon. Video calling between both platforms is also in the works.

On Feb. 12, Giovanni Mezgec, general manager of Lync, told eWEEK, “By bringing the assets that we have on the consumer front with Skype and on the enterprise front with Lync, we can have a unified platform that really brings communications from the living room to the boardroom in a way that makes sense and is rationalized and connected rather than having disconnected islands.”

Mezgec revealed that Microsoft planned to enable voice, chat and presence reporting between Lync and Skype in June. On May 29, he announced on Skype’s Big Blog that Microsoft had switched on those features a little early. “Today, we’re excited to announce Skype and Lync customers around the world are now able to connect with each other from across these platforms,” he wrote.

“This is our first step in combining the enterprise richness of Lync and the global reach of Skype to transform the communications experience and enable Skype users to reach professional contacts in organizations of all sizes,” added Mezgec.

Adding Lync contacts requires that a Skype account holder have a Lync user’s email address and uses it to send a contact request via the software client. Once the request is accepted, the users show up on each other’s contact list.

The newly enabled integration furthers Microsoft’s mission to “humanize” communications. “Lync-Skype connectivity removes barriers created by the rules of different devices, applications and networks that keep people from connecting seamlessly on the devices they use most,” stated Mezgec. He asserted that by de-emphasizing the technology that people use and “putting people back at the center of the communications experience, Lync-Skype connectivity will allow users to work the way they want to.”

The news arrived as Microsoft’s lawyers faced off against Cisco in Luxembourg to fight claims that its $8.5 billion deal to acquire Skype in 2011 had created a monopoly in the video communications market. Cisco, a major competitor in the video conferencing market, argued that in the wake of the buy, Microsoft was able to control 80 to 90 percent of the Windows video calling market.

Microsoft isn’t buying Cisco’s stance. According to a Bloomberg report, Georg Berrisch, a lawyer for Microsoft, commented, “Cisco pretends to seek interoperability, but what it actually seeks is that it wants Microsoft to change its products.”

Failing a complete annulment of the European Commission’s approval of the Skype deal, Cisco would like that some conditions ensuring fair competition be enacted. A ruling from the EU General Court may arrive within months.