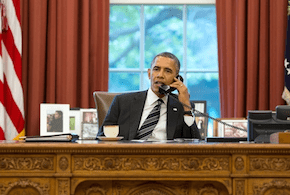 President Obama took a strong stand on net neutrality earlier this week when he told reporters at a business forum that an Internet that is equitably available to all is one that will allow the most innovation and fairness.

“One of the issues around net neutrality is whether you are creating different rates or charges for different content providers,” Obama told the reporters gathered at a business forum for African leaders in Washington on Aug. 5, according to a story in The Washington Post. “That’s the big controversy here. So you have big, wealthy media companies who might be willing to pay more and also charge more for spectrum, more bandwidth on the Internet so they can stream movies faster. I personally, the position of my administration, as well as a lot of the companies here, is that you don’t want to start getting a differentiation in how accessible the Internet is to different users. You want to leave it open so the next Google and the next Facebook can succeed.”

The president’s comments came as the issue of net neutrality continues to be a focus of government and public discussion.

In July, a 60-day public comment period by the Federal Communications Commission (FCC) ended as the agency collected more comments on net neutrality discussions, according to an earlier eWEEK report. In January, a U.S. District Court dismissed the FCC’s ability to enforce net neutrality—an FCC guiding principle that all traffic on the Internet should be treated equally. Since then, and amid much debate, the Commission has been working to put new, enforceable rules in place.

On May 15, the Commission voted 3-2 in favor of Chairman Tom Wheeler’s Open Internet Notice of Proposed Rulemaking—a new rules proposal. While the proposal insists that no Internet service provider (ISP) can purposefully slow down any type of traffic, it allows for the controversial possibility that companies, under “commercially reasonable” terms, could pay for extra-fast service. With the vote—which didn’t confirm the proposal, but moved forward the task of establishing firm rules—Wheeler reopened the window for public comment and was met with historic levels of response. The FCC did not release exact counts of the responses they received, but they apparently crashed the site under the strain.

Several Internet policy and privacy activists told eWEEK in emailed messages that they are happy about Obama’s latest stance on the net neutrality issue.

“The President pretty unequivocally came out against the notion of fast lanes,” said Gabe Rottman, a legislative counsel and policy adviser to the American Civil Liberties Union (ACLU). “He said that in no uncertain terms that large companies should not be able to pay more to access faster communications and struck a strong blow for innovation on the Internet.”

Michael Beckerman, the president and CEO of The Internet Association, a lobbying group that was created in July 2012, agreed. “There is little doubt that segregating Internet traffic into fast lanes and slow lanes will discourage innovation online,” wrote Beckerman. “The Internet industry calls for strong, enforceable net neutrality rules that protect an open Internet free of censorship, discrimination and anti-competitive behavior. To achieve this, net neutrality rules should apply universally to both wireline and wireless providers.”

Meanwhile, Marc Rotenberg, the executive director of the Electronic Privacy Information Center (EPIC), had a different take on the president’s comments. “Net neutrality should be less of a concern for the White House,” he said. “The Internet policy priorities are increasing broadband access in the United States and addressing industry consolidation.”

As Obama was running for the presidency in 2007 he pledged to support net neutrality if elected.