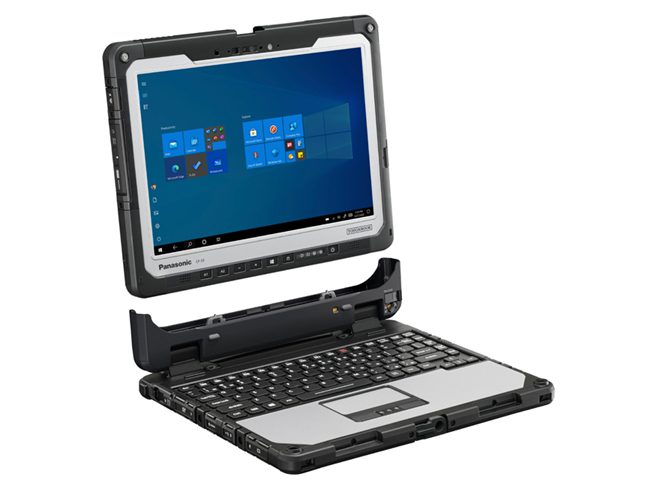 The first time I took the new Panasonic Toughbook 33 out of its box for testing, I dropped it on the floor. The computer was unscathed, the hardwood on the floor suffered a dent. The drop wasn’t intentional, but instead was the result of the unexpected weight of this tablet – keyboard combination.

The 6.5-pound weight may seem like a lot, but in the world of ruggedized computers, it really isn’t. However, it does explain the nice carrying handle attached to the rear.

In fact, the Toughbook 33 is actually a 12-inch tablet computer that weighs in at 3.4 pounds. The premium keyboard that was attached weighs another 3 pounds and is an option. But the two are married in such a way that they appear to be (and operate as) a normal laptop computer. A latch on the right side of the tablet portion lets you remove the screen and use it as a Windows tablet.

Not another iPad clone

As a tablet, the 3.4-pound weight takes some getting used to. But there’s a lot more to it than just another iPad clone. It’s fully ruggedized, it has a stylus that works like a Wacom Digitizer in that the tablet knows when the stylus is near the screen before it touches it. It’s attached to the tablet by a springy cable and has a dedicated socket where it lives when you’re not using it. The tablet changes between portrait and landscape orientation as needed, and it has the standard Windows 10 on-screen keyboard.

The optional keyboard makes the tablet into a laptop computer. The tablet slides into a pair of guides, where it engages a locking apparatus that’s quite sturdy. The keyboard includes another battery, and both that and the battery in the tablet portion work to power the combined unit. There’s a charging port on both the keyboard and on the side of the tablet, and either will charge the combined unit.

This was one area where I ran across an issue with this computer. As originally delivered (or perhaps because of the fall) The power connectors between the keyboard and the tablet didn’t make an adequate connection. As a result, charging the keyboard wouldn’t also charge the tablet. Panasonic provided a replacement unit that worked properly.

The tested unit is apparently a standard configuration with pretty much every port you could ask for. There are both USB-C and USB-A ports, an HDMI port, Ethernet and audio. There’s a space for an optional 9-pin serial port (which was not included on the test unit) and slots for two SIM cards along with an eSIM. The optional keyboard includes a docking connector, more USB ports, another HDMI port and a 15-pin VGA connector. There’s another Ethernet connector and a 9-pin serial (USB) port and a slot for an SDXC card. The docking connector is backward compatible to work with previous Toughbook docking stations. There are optional desktop and vehicle docking stations available.

This computer was designed with ruggedness as its primary design goal. For that reason, features such as ergonomic design take second place. A good example is the keyboard, which is about an inch higher than the surface on which the device is placed. This makes touch-typing awkward. The unit overall is nearly two inches thick. The rugged surround protecting the innards is about an inch in each direction, which adds bulk.

However, the keyboard itself is nicely designed; there is a spacious palm rest and a well-designed touchpad. The tablet itself features an excellent touchscreen. This means you have three pointing devices, including your finger on the screen, the stylus and the touchpad.

It’s important to remember that this computer, whether it’s being used as a tablet or a laptop, isn’t designed for writing your next novel, it’s designed to be used in a work environment where filling out forms and browsing the internet are more likely use. This is also the reason that this computer has a screen with a 3:2 aspect ratio which is better suited for the work it’s intended for compared to the 16:9 ratio that’s good for watching movies.

In terms of performance, this laptop is middle of the road. However, its WiFi performance is stellar. Testing this unit on a WiFi 6 network attached to Verizon’s gigabit fiber showed internet throughput ratings of nearly 900 megabits per second in both directions.

The Toughbook 33 is indeed tough, and it appears to be designed for specialized uses in the field or in service with the military or law enforcement. It meets a long list of MIL SPEC and related industry standards.

You can get the Toughbook 33 with a choice of Intel i5 and i7 processors, and SSD storage up to 1 terabyte. The tablet has cameras on the front and back, and the front camera works with Windows Hello. These devices are highly configurable, which means that the price can vary quite a bit. The standard unit costs $3200 with the keyboard costing $600. Considering the quality of this unit, along with its toughness, that’s not a bad price at all.