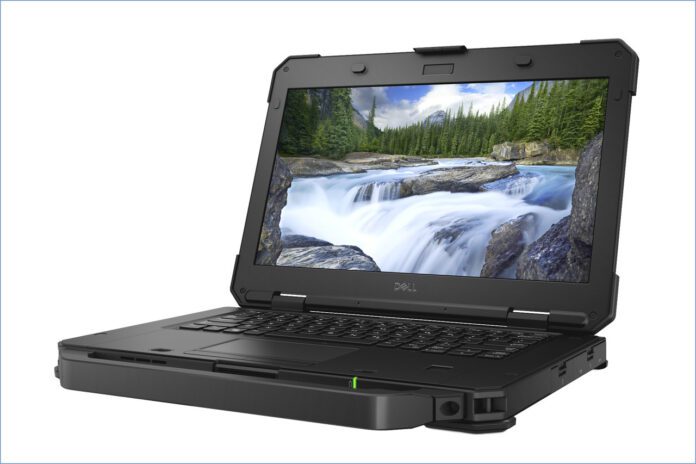 Other options for all three rugged notebooks include several graphics processing options, including integrated Intel HD 520, 620 and UHD 620 or AMD Radeon 540 and RX540 chips. The notebooks can be configured with PCIe NVMe solid-state drives in 128GB, 256GB, 512GB, 1TB or 2TB capacities, or with 256GB, 512GB or 1TB PCIe NVMe self-encrypting drives.

Optional 8X DVD-ROM, 8X DVD+/-RW or Blu-ray RW drives can be configured for the Latitude 7424 or 5424 models. The Latitude 5420 can use optional DVD or Blu-ray drives only as external devices. The devices also can be ordered with an optional integrated FHD video web or IR camera with a privacy shutter.

The three models all include a three-cell 51Whr lithium-ion battery and offer an optional second 3-cell lithium-ion battery for hot-swapping, as well as 10/100/1000 gigabit Ethernet and Intel Dual Band Wireless AC 8265 (802.11ac) 2×2 with Bluetooth 4.1, Intel Dual Band Wireless AC 8265 (802.11ac) 2×2 without Bluetooth, or with a Qualcomm QCA61x4A 802.11ac Dual Band (2×2) wireless adapter plus Bluetooth 4.1. Optional broadband capabilities are also available, including Qualcomm Snapdragon X20 LTE for use with multiple carriers.

Several Ports to Choose From

Slots for SD cards and SIM cards are included, while optional PCMCIA or Express Card 54mm slots can be included.

“The world’s toughest jobs require some of the toughest training, and that very same discipline has yielded the next generation of Dell’s Rugged notebooks,” wrote Damon Muzny, a Dell spokesman, in a post on the Dell blog. “No two Rugged PC customers are the same, but they do have something in common: the need to combine end-to-end security with Dell Latitude reliability and manageability, wherever they’re working and whatever they’re doing.”