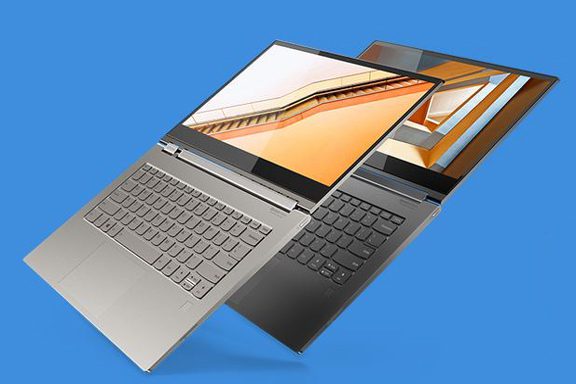 Laptops have been on a slow march to innovation for around 15 years.  I go back and look at, say, a Sony Vio from around 2002, and it was sleek, ultrathin and damned attractive.  Granted, battery life wasn’t exactly great (at something like 3.5 hours on a good day), but Sony had the concepts of sexy and light in its pocket.

Until recently, it has been hard to find much in the way of innovation. Yes, we got some interesting hinges, and we moved almost globally to metals and some carbon fiber (which almost never looked like automotive carbon fiber), but for the most part, they looked just like laptops we’ve become used to for the last 20 years. Yes, we had 2-in-1s, which were mostly just used as laptops with enhanced touch screens; we got USB-C charging; and we got ever better radios for connectivity. But the look of the laptop, with few exceptions–like the original Microsoft Surface product–largely remained unchanged.

This last year, however, there was a bit of a rebellion. Microsoft released the Surface Go, a 2-in-1 tablet forward design that was small enough to be used as a tablet; HPI released the Spectre Folio that was larger but felt in your hand like a leather-bound portfolio likely ideal for attorneys; and Lenovo released its Yoga Book C930 with dual displays–one traditional and one ePaper.

Let’s revisit these products and talk a bit about who might use them.

The Microsoft Surface Go was a surprise in a number of ways.  First the idea of a 10-inch Windows product has been a non-starter for years.  Users just didn’t want a display under 12 inches, and these laptops didn’t exactly light the market on fire.  But the standard iPad, which many tried and failed to use as a laptop replacement, made users more tolerant of smaller size, and the Surface Go became viable.  This is the most tablet-forward of the three products I’m talking about. This would be for the person that largely wants a tablet, is OK with the limited number of Windows tablet apps–particularly if they like to sketch.

This is for the user who wants to carry the product in a purse or large jacket pocket.  Given its size, it likely is ideal for a child in his/her early-to-late teens who also has a desktop computer at home for gaming and higher-performance tasks. In fact, this last user is similar to many adults who only need performance some of the time while they are in their office or home.  I expect this product to eventually migrate away from Intel processors to the Qualcomm Snapdragon form to optimize on connectivity during the 5G rollout next year. and because this product, in particular, will benefit a lot from the coming Microsoft Virtual desktop.

I so wish this laptop came in black, because I’m not a huge fan of the two colors HPI gave it: brown and burgundy.  However, the HP Spectre Folio product feels extremely good in your hand, and it has a large enough 13-inch screen for real work. This is really the only 13-inch product I’ve ever felt comfortable holding; it likely is ideal for attorneys, accountants and anyone else who: a) needs to write on their product; and b) wants to maintain a very professional, but somewhat unique, image. It’d be fun to see a Steampunk spin on this product.

This is also WAN-capable, and it has a unique cantilevered screen that allows it to play movies on your airplane table without the stress of waiting for the person in front to recline their seat and break the screen. The product has, thanks to the leather, an organic retro feel to it that is distinctly comforting, taking us back a bit to simpler times when we surrounded ourselves with more natural materials.  Back when I was an internal auditor, this would have been my ideal laptop.

The Lenovo Yoga Book C930 is a different kind of hybrid product with a regular screen on the top and an ePaper screen on the bottom. This is very much like taking an Amazon Kindle, mating it with the Surface Go (see above) and coming up with something that does both. This could be the ideal blend of tablet/reader/notebook if the software was fully up to the task of putting stuff on the screen it needed to be and the device changed modes automatically. This isn’t to say it is bad, but Windows was not set up to use two displays using very different technology. Lenovo is pushing the envelope here and it shows, but with a little effort, you can get most things to work.

Sometimes developing unique skills can be rewarding, because when this product works right, it is pretty amazing; this is because ePaper uses a tiny fraction of the power of a regular LCD display.

We aren’t alike, and while some vendors (Apple comes to mind) think we should all fit into boxes, they define that we really don’t. It is our differences that often define us, and the personal technology we use should reflect those differences. None of these products is low risk; each of them push the envelope in terms of what users find acceptable. Two with small screens, one covered in leather and every one of these products has a WAN connection option (or simply included), so they anticipate the connected world of the future (granted, none are 5G-enabled yet).

But it’s great that the manufacturers are being creative and innovative again, and with each innovation we come closer to understanding what the next breakthrough product might be.  I think we are zeroing in on highly portable products using more natural materials (not plastics) that are extremely portable an always connected. Next year should be very interesting as a result.