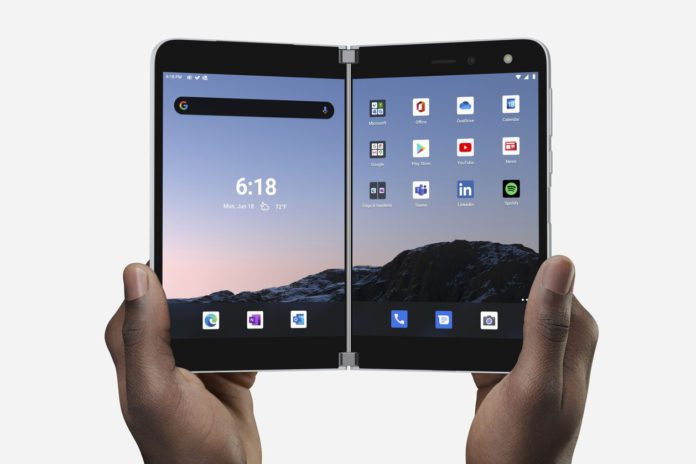 Microsoft’s last major attempt to pivot a market belonging to someone else was with the Zune, which attempted to redefine the iPod segment into something with video and where music sharing was legal. It failed, and it was embarrassingly followed by the iPhone, which showcased what Microsoft should have built instead.

Microsoft’s new Surface Duo device has the potential to do what the company has never done successfully: force a market pivot to a new model. Let’s talk about that this week.

Changing the direction of a market is very difficult because it requires a ton of good marketing to make that change happen. However, displacing an already dominant product with a similar offering is no walk in the park either. Microsoft has successfully chased and successfully displaced—either entirely (Netscape, Lotus 1-2-3) or partially (macOS, PlayStation, AWS)—competitive offerings in the past. However, flipping the market to a new concept isn’t something it has successfully undertaken yet.

Now Microsoft did come up with the iPhone as a concept, as did Palm, even before Apple did, but in both cases, the efforts were stillborn. The company almost did it again with the Courier Tablet, but that too ended up on the cutting room floor without any real attempt to bring it to market. Oh, and then there was Microsoft Bob, which was a decent attempt to pivot the GUI to something new. Still, it was killed because it went off the rails—likely because it was decades ahead of its time (you could argue it was an early precursor to integrated digital assistants that are now relatively common).

So Microsoft has demonstrated the ability to take, or partially take, a market with a product similar to a market leader. However, to my recollection, the company hasn’t successfully pivoted a market since Microsoft Office, in which it caught everyone else flat-footed with a strong product bundle.

The Duo device (I won’t call it a tablet or a phone) has, like Office, the potential to pivot the market. Looking back, the last time the personal technology market pivoted was when Apple brought out the iPhone in 2007 and destroyed the market for the then-dominant business-oriented smartphones from Microsoft, Nokia, Palm and RIM (BlackBerry). Apple had three solid pivots: the iPod, which pivoted from the Sony Walkman; the iPhone, which pivoted from keyboard business smartphones; and the Apple Watch (which was far less successful because it was tied to the iPhone), which pivoted from focused devices like the Fitbit.

Now Apple hasn’t executed a strong pivot since Steve Jobs left the company (and later, Earth in 2011). The Apple Watch was the last attempt, but CEO Tim Cook didn’t follow Jobs’ model in naming nor in execution (the iPod was platform-independent while the Apple Watch is tied to the iPhone), which kept it from doing what it could have done (it is arguably the best smartwatch in the segment).

So pivoting a market isn’t easy.

The Elements of a Successful Pivot

What Apple taught us was that there is a way to pivot a market successfully. The iPod took three years of hard work, doing something Jobs did not want to do (decoupling it from the Mac) and a ton of marketing before it took off. It also needed Sony to not respond well, which is a critical aspect of this that carried over into the iPhone.

In both cases, music players and smartphones, instead of defending the market, the defenders tried to themselves pivot to where Apple was going, and that was instrumental to Apple’s win. In Sony’s case, it owned a record company and was so worried about piracy that it crippled its iPod competitors with DRM (digital rights management), making their players too complicated to use. In the case of the smartphone, the vendors tried to create their own versions of the iPhone rather than showcasing the safety, security and reliability shortcomings of the new design, effectively ceding market leadership to Apple after initially acting like Apple didn’t have a chance.

In short, to pivot the market, you need three things (and this isn’t multiple choice): You need a significant marketing budget, so you can get a critical mass of people on the new platform; you need a product that does interesting things people want to do but can’t now; and you need the existing segment owner(s) to fail to defend their leadership position.

There are already foldable-screen products in the market, but this one is different, and it does do a few things existing smartphones don’t do well. It is arguably a better reader with a more booklike format and, for watching videos, it provides a better platform for hands-off video watching than a smartphone does without an accessory. For video conferencing, the multiple screens are better at both showing the faces and the content—mainly when presenting—and, when folded, the product should be more robust (able to protect against damage) than a design without a naturally protected screen.

With marketing clearly behind its Xbox and Surface products, Microsoft stepped up, but it hasn’t run a broad user-focused marketing program at that scale in some time. The firm certainly can afford one, but even Apple doesn’t market at the required level for a market pivot now. Microsoft doesn’t need to pivot the market, but the product is capable of it, given the right level of investment. Without it, the offering is more likely to be seen as an alternative to the growing number of foldable screen devices in the segment, even though it is very different.

As far as Apple screwing up, it does own content, but it is streamed, so the same IP protection goal is unlikely to emerge at Apple. Apple is searching for direction; the HomePod was an example of a failed Apple competitive offering (basically an overpriced variant to the Amazon Echo without the breadth), so the company might try to chase the Duo. But I doubt Apple will do it right off, and it would only happen if the Duo got a ton of sales, which, even if Microsoft executes sharply, is likely going to be in the second or third version of the product—much like it was with the iPhone.

This analysis suggests that a near-term market pivot from the iPhone screen phone design is unlikely. However, the product does have the potential to gain a critical mass of focused user advocates, which could drive a pivot in three to five years, depending on Microsoft’s sustained efforts and Apple’s response to them.

In a way, Microsoft’s Duo has the potential to re-establish a business-focused communications device, much like the Microsoft Phone was but designed against the world the way it is now. For me, the attraction is that currently, I carry both a smartphone and a Kindle Fire tablet (which I have nearly lost several times), and this could replace both, simplifying what I carry. I’m also an early adopter by nature and am used to the pain associated with being one of the first to use a new product. (I particularly enjoy not having something everyone else has.) I also use Microsoft Teams a lot.

This likely sets who should be interested initially: those users with a critical focus on wanting to be the first to use a new product and being willing to take the pain associated with being an early adopter of anything; those who like to read digital books; those who like to stream media on their phone; and those who need the collaboration capabilities. There is an old saying, “The prospectors get the arrows, the settlers get the land,” that is relevant here, given this is a first-generation offering.

The product is one of the first in a long time that has the potential to flip the market, but likely not until its second or third iteration. For now, it is a strong example of innovation in a segment that, at least concerning device design, needs it right now. The iPhone design is starting to look dated, which is why there is so much effort to find the next new concept.

In short, the Surface Duo won’t be a Zune (the execution is far above where the Zune was); the question is whether it will eventually step up to reaching its potential as an iPhone-like product that can pivot the market. That question will depend on several things I’ve mentioned, and it will take two to five years.

Now the even bigger question is this: Will the device be the ideal front end for a virtual desktop on Azure? Because that is where I think it will eventually go, and that, my friends, could result in an iPhone killer.