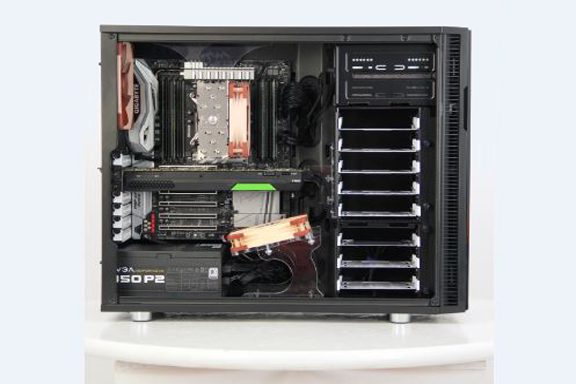 Your buying experience with Puget Systems will likely start with an interview. A Puget specialist will want to know exactly how you will want to use your workstation, and the questions will be detailed.

I explained that I was looking for a workstation that would support video editing. I would be running Adobe’s Premier Pro, as well as Photoshop and LightRoom. I thought 4K UHD video would be the upper limit. I’d be using a Nikon D500 as the source.

Finally, after some discussions regarding the budget that I had in mind, we arrived at a set of configurations. A few days later, a workstation weighing over 50 pounds arrived in the lab, ready for some testing.

The workstation, in a hefty black Fractal Design R5 case, had a rarely seen Intel i9 7940X processor running at 3.1GHz. It came with 64GB of memory and two solid-state drives. One, a 500GB SATA SSD, is intended to hold Windows and program files. The other, a speedy Samsung M.2 drive, is intended for holding data. The PNY Quadro 5000 graphics card will handle multiple 4K UHD monitors.

I was surprised at the selection of the i9 processor rather than the Xeons I’d expected, but when I spoke with the folks at Puget Systems, I found that the i9, with 14 processor cores, would be significantly faster than the dual Xeon processors I’d expected. There were a couple of reasons:

The Fractal Design case, which is 18 inches high and 20 inches deep, combined with the over-50-pound weight of the workstation means that it’s almost certainly going to be mounted on the floor. This position, probably at the side of the desk rather than on it, leads to a unique placement of the power switch and a pair each of USB 2.0 and USB 3.0 ports, which are on the top of the computer along the front edge rather than on the front panel.

The top mounting is much more convenient, because it makes commonly used ports easy to see and use. The top edge also has sound input and output connectors. The front panel of the computer swings open to reveal the DVD drive. There’s also a spot for a removable hard drive, but this computer wasn’t equipped with one of those.

This workstation is unusually well-equipped with input and output ports on the rear. In addition to four USB 3.0 ports, there is also a pair of Thunderbolt 3 ports, a pair of DisplayPort video ports, a pair of USB 2.0 ports, a USB Q Flash port for flashing the computer’s BIOS, a Gigabit Ethernet and a WiFi antenna port.

The anticipated role of this computer in media creation means that it’s got more emphasis on the audio outputs than similar systems, including a complete set of speaker connectors for surround sound as well as an optical audio connector. There’s even a PS/2 keyboard/mouse connector and a microphone jack.

All of this effort to make the computer a killer solution for media creation showed itself in the level of performance using Adobe content creation software. Image manipulation in Photoshop and LightRoom showed no discernable delay, regardless of the size or complexity of the image. While I wasn’t able to create any feature-length movies, the video files I did use with Premier Pro were rendered faster than I’ve seen in the past. Even exports from Premier Pro, which typically require a lot of compute cycles, happened very quickly.

The only downside to this workstation is that it’s not as easy to access nor as modular as previous workstations we’ve tested. To open the case, you must unscrew two screws on the back of the case and press a latch. The components aren’t the modular, tool-free design that was in the HP and Lenovo workstations.