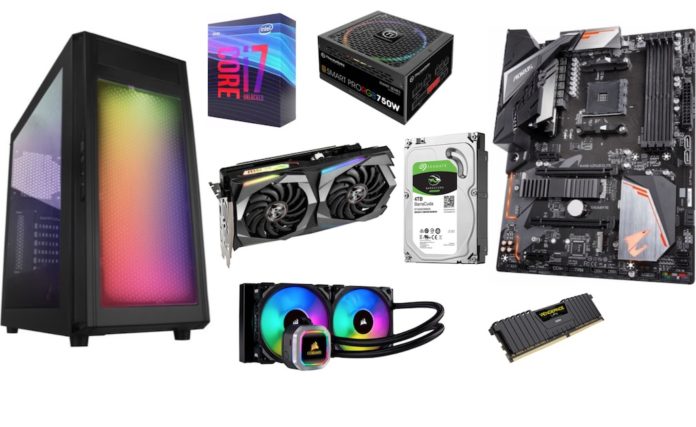 Last week there was a huge election in the U.S. with both sides so divided on core issues (starting with the truth) that you’d be right to wonder if citizens lived on the same planet, let alone the same country. As a result, the stress level for those of us living here was off the charts. After a few hours, I couldn’t take it anymore, and I had an AMD PC project to complete, so I threw myself at the task and found it strangely therapeutic.

It has been nearly half a year since my last PC build. It struck me that one of the ways AMD or Intel could stand out from those of us who still build our PCs is to update the motherboard specification, so the build is naturally cleaner, more comfortable and less frustrating. However, that frustration did keep my mind off the election and on the project, which was, this time, clearly a positive for me.

Let’s talk about my latest PC build this week while still waiting for the election results–because a week later, we still don’t have all the votes counted.

AMD vs. Intel And Config

Intel is arguably stronger with laptops in focus and amount of choice, while AMD kept focused on desktop computers during the period when many were arguing that PCs were dead. As a result, AMD tends to provide the best value for the buck for a desktop PC build.  My build used the new Ryzen 9 5900X processor (the link is to a third-party benchmarking site that confirms this part is wicked fast).

However, the best AMD value remains the Ryzen 5 3400G, including graphics. If I’m building a workstation or gaming rig, Ryzen 9 would always be the better choice, but if I’m building a machine for someone else or more for work than play, I prefer that Ryzen 5 with graphics. One of the reasons is that you can then boot the machine without the graphics card and run down any problems without that graphics card, which can take a ton of space, getting in your way. Then you install the graphics card, and you are done.

I made a mistake with the motherboard that you can learn from and got the MSI MPG X570, which, on spec, looked like the best deal for the money, but I ran into a problem. That board doesn’t allow you to flash it without it booting first, and the new AMD processors require existing boards to be flashed and updated. Fortunately, the board did have a diagnostic light that focused me on the processor and, eventually, I was able to flash the board using that Ryzen 5 part I had, but it took me four hours to work through the process; I wouldn’t recommend it.

I was particularly pleased with the case I picked up. It was an ABKONCORE H500G with a built-in fan controller, which synced all fan colors and allowed the synced lights to pulse. It is one of the best-looking cases I’ve ever used, and it was reasonably easy to hide most of the wires, though I could likely go back in and clean them up more.

I’m a fan of water coolers but have gotten tired of cutting my hose and dealing with leaks, so I picked up a packaged ID-Cooling Zoomflow 240X ARGP CPU. The lights plugged right into the case light controller, so it now syncs with the case fans and looks impressive.

A 500GB Samsung SSD and older AMD graphics card (I’m expecting a new one shortly) and a Corsair 750W power supply I had sitting around, and Windows 10 Pro completed the build.

Now I can typically throw together a new system in a couple of hours, but this build took me 1.5 days because I had issues with the bios as noted and dealing with the impressive amount of cabling to wire all the fans and lights.

I think this is an area that is well past time for improvement, because you could better aggregate those plugs and sockets away from the motherboard and then move all the wiring to the back of the case, where it generally can’t be seen far more quickly and easily.

For a CPU review, I generally rely on PC Mark 8 these days because most of the other benchmarks I use rely too heavily on the graphics card for their scores. The score for this build was 4,400, and compared to my Threadripper primary system, which comes in at 4,697 and costs about twice as much, that is an excellent score.  And the system is substantially quieter than the older AMD-based system it will eventually replace. My next build is with the AMD 5950X, and I plan to make this a higher performance build. I’m interested in how much that will increase my PC Mark 8 score.

Wrapping Up: Peace of Mind

But my big takeaway isn’t the impressive performance I got from the system, but the peace of mind building the system gave me. Yes, I had issues, but they were within my control, and I corrected them. When dealing with a world with issues outside of your control, there is something very satisfying with doing something that is moderately difficult successfully.

So my advice is, regardless of whether you build with AMD or Intel parts, the effort of building a new desktop PC is worth it. And when you are done, a great deal of the benefit is just able to control an outcome during these anxious times.