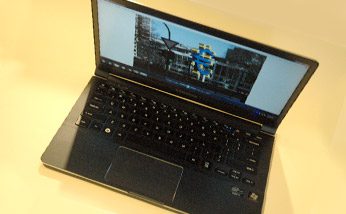 Ultrabooks are supposed to be the PC market’s savior. The device category, created by Intel, is made up of laptops that must meet a host of parameters, including limits on thinness, processor type, size and more.

The idea was to appeal to consumers increasingly looking for slim, light and highly mobile notebooks to stop the onslaught of iOS and Android tablets cutting into PC makers’ sales.

However, Ultrabooks haven’t proven to be the savior that Intel expected them to be. PC shipments are actually down worldwide, and vendors are wondering what they can do to catch up to soaring tablet sales. What’s worse, research firm NPD DisplaySearch announced recently that tablet shipments will soon outpace PCs, making it increasingly difficult for Ultrabooks and other PC forms to keep pace.

But Intel has a plan. The company says that touch-screens must be bundled with Ultrabooks by the end of the year. Ultrabook sales prices, another major issue standing in the way of their adoption, will also come down. Intel believes that making Ultrabooks more tablet-like while reducing prices will help them regain some ground in the PC market and start to reign in competing tablets.

Whether that will prove true remains to be seen. But if anything is certain, it’s that Ultrabooks definitely need touch-screens.

Tablet sales are soaring. In fact, according to research firm NPD DisplaySearch, tablets are expected to outpace notebook sales, making it abundantly clear that the future resides in the touch-screen. Intel knows that. And that’s probably one of the chief reasons it wants to bring touch displays to its notebook line.

Using a touch-screen makes it easier to perform a host of tasks. In the enterprise—a market that Intel is targeting with Ultrabooks—productivity can be enhanced with touch displays. Intel understands that. Now it wants to make the case to corporate customers that Ultrabooks are true workhorses. The best way to make that case is to deliver touch-screens to its devices.

4. It’s a hallmark of mobility

Ultrabooks are supposed to be the pinnacle of mobility. Yet they don’t come with the single feature that has defined mobility in the last several years—touch-screens. Intel is finally rectifying that by adding touch-screens to its Ultrabook specification.

Part of the reason touch-screens didn’t come to Ultrabooks was because Windows wasn’t ready. Now with the release of Microsoft Windows 8 that situation has changed. Microsoft is offering touch functionality in its flagship software and Intel is looking to capitalize on it.

Let’s not forget that Windows 8 now comes with an application marketplace. Developers are creating applications that accommodate touch-screens built into devices like the Microsoft Surface. Those apps won’t work with Ultrabooks in their current form. Applications with touch-screen support will work. That matters.

The world is changing. Although there was once a time when touch-screens were new, the average consumer and enterprise user today knows very well how to touch their way around a display. While there are still many PC users who aren’t used to the touch-screen interface, many folks are coming to expect them in mobile devices of all kinds. In fact, they often find themselves tapping on screens expecting a touch-screen response. Ultrabooks must respond to that. Intel knows it.

Looking around the technology industry, it’s hard to find any long-established product category enjoying robust sales growth today. For example, mobile products without touch-screens are failing. PCs are on the decline because they generally lack touch displays. The old ways of doing business aren’t working. And Intel needs to respond to that with touch-screens in order to jumpstart Ultrabook sales.

It’s hard for today’s consumers and enterprise users to see why they should invest in Ultrabooks. After all, the product category is filled with products that are about as thin as lightweight notebooks and come with price tags that are often twice as high. Plus, they lack touch-screens. Intel is trying to reinvent the Ultrabook value proposition. And the best way to kick that off is with a touch-screen.

10. A move towards simplicity

Simplicity is becoming the name of the game in the technology industry. And touch-screens just so happen to make products simpler. Intel has realized that and will try to simplify Ultrabooks with touch-screens. Will it be enough to get the technology off the ground?