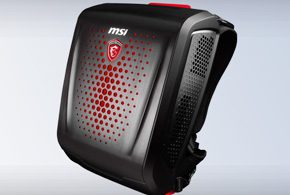 Computex 2016, the major computer trade show that takes place each year in Taiwan, is currently underway. And as usual, there is no shortage of PCs powered by Microsoft’s Windows operating system.

This year, it’s Windows 10’s turn in the spotlight, since the OS launched well after last year’s expo closed up shop. Microsoft and its hardware partners are banking on the OS to usher in new virtual reality experiences, inexpensive 2-in-1 PCs and new Windows tablets that rival Microsoft’s own standard-setting Surface Pro devices.

HP and MSI and made some of the most audacious announcements, revealing their backpack PCs for VR gaming, the HP Omen X and MSI Backpack PC (pictured), respectively. Both models are aimed at enabling their wearers to explore virtual worlds without tripping over their visor cords. Details are scant, except for the fact that MSI’s hardware will be powered by Intel Extreme Edition Core i7 processors and a GeForce GTX980 graphics card from Nvidia. Expect the companies to shed more light on their hardware as enthusiasts seek out systems that are compatible with VR headsets like the Oculus Rift.

The GT83 Titan SLI contains an Nvidia GeForce GTX980 SLI graphics subsystem, enabling the hardware to display 4K surround modes. It will cost $4,500 when it goes on sale in August. Also scheduled to go on sale this August is the GT73 with a GTX980M SLI GPU for $2,500.

Dell, meanwhile, is targeting the low end of the Windows 10 notebook market with its new Inspiron 11 3000, a line of colorful, 11-inch 2-in-1 devices with displays that fold back over the keyboard section. Processor options include Intel’s Core m3, and buyers can choose as an option solid-state drive (SSD) storage in place of conventional and battery-hungry hard drives. Prices start at $249 when the notebooks go on sale June 2 in the United States and China.

Asus at Computex took the wraps off its Surface Pro competitor, the Transformer 3 Pro. The tablet includes the company’s Active Pen stylus and a snap-on keyboard cover—the latter is a separate accessory on Microsoft Surface Pro tablets—as well as an infrared camera that enables users to log in using Windows Hello, the face-detection biometric authentication technology included in Windows 10. Prices start at $999 when it starts shipping during the third quarter.

Asus seemingly also has Apple in its crosshairs. The company announced the ZenBook 3, a Windows 10-powered premium notebook to rival MacBook. It features a built-in fingerprint reader and a screen bezel that’s 18 percent thinner than the one found on the MacBook, and it measures just 0.47 inches thick (the MacBook measures 0.52 inches at its thickest point).