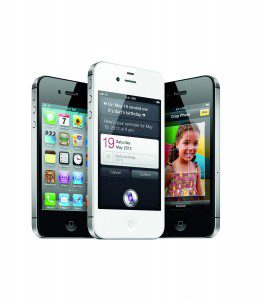 Today’s launch of the iPhone 4S, iOS 5 and iCloud is a milestone for Apple in two significant ways. First, it was Tim Cook’s first time in the spotlight since being named CEO in August, upon the retirement of Apple founder Steve Jobs. Second, with the release of iOS 5 planned for next Wednesday, Apple’s pushing voice control as a new frontier for user interface; the purchase of Siri almost a year and a half ago gave Apple a leading position in voice recognition and artificial intelligence that competing platforms such as Android will find difficult to match.

The fifth-generation iPhone is, cosmetically speaking, no more than a revamp of the company’s iPhone 4; but if the specs are any indication, the 4S is actually far ahead of its immediate predecessor, with a dual-core A5 processor and significantly improved photography and video features. The image sensor in the iPhone 4S is said by Apple to have 60 percent more pixels than the iPhone 4’s sensor; the lens aperture is also larger, at f/2.4, and the new iPhone can record 1080p HD video, with image stabilization and better image quality in low-light conditions. The iPhone 4S is available in three storage sizes: 16GB, 32GB and new for this model, 64GB. It will be available on October 1214, and for the first time, it will be a true “worldphone” with support in the same device for CDMA and GSM networks; at launch in the United States, the authorized carriers will be AT&T, Verizon and Sprint. Preorders will be accepted starting on Friday, October 7.

When iOS 5 is released next week, it will offer direct access to the Camera and Photos apps from the lock screen, as is currently the case with the iPod app. Twitter will be a built-in app for the first time, and users will be able to use the new iMessage service to share text messages, photos and videos swith other iOS 5 devices. The new iOS version will be offered as a free software update for iPhone 3GS and iPhone 4; Apple has not specified when iOS 5 will be available for the iPad and iPad 2 or the third and fourth-generation iPod touch, but will offer it on those devices, also as a free update.

Although it’s nice of Apple to extend the benefits of iOS 5 to users of the 3GS, I’m not certain how well that’s going to work in practice, given the debacle that was iOS 4 on the iPhone 3G. Although I’m sure the company’s engineers have done their best, I have a sneaking suspicion that we may see the “supported” tag disappear early next year, if the real iPhone 5 does in fact shake off the manufacturing issues that have been rumored for it.

The free iCloud service is also scheduled to launch next week, and it’s shaping up to be an extension of Apple’s walled-garden approach; it will require an Apple device running iOS 5, an Mac running OS X Lion, or a PC running Windows Vista or later. The service will include 5GB of free cloud storage for backup, mail and document storage; apps, books, and audio and visual media will not count against this limit. Additional storage will be available in a tiered price structure; roughly speaking, the annual cost will be $20 annually for every 10GB of extra space.

The AI and voice recognition features that Apple acquired with its purchase of Siri will finally debut in iOS 5, and although it’s showy, the demos you’ll be seeing in the company’s advertisements are less than inspiring; listing Italian restaurants in San Francisco’s North Beach neighborhood is about as difficult as finding deep-dish pizza in Chicago. I’m also kind of put off by the claim of Scott Forstall, Apple’s vice president of iOS software, that “what we really want to do is talk to our device!” I guess that’s true, if you’re the stereotypical Silicon Valley geek with no social skills. Personally, I’ve never quite seen the point of voice control unless I’m driving, but it will be interesting nevertheless to see what developers do with Siri.

Aside from the usual cheerleading, the most interesting statistical nugget from Cook’s presentation came in the area of iPod sales, if only because the iPod is what brought Apple back to relevance; according to Cook, in the 10 years since the introduction of the company’s first MP3 player, over 300 million devices have been purchased. One has to wonder how many of those have been returning customers; I’ve bought four or five, and expect to buy another as a gift this Christmas, so if my experience is any guide, that says something about customer satisfaction. Even if there may be a couple billion people who have never seen one, the iPod certainly redefined the market for mobile media players; Microsoft admitted yesterday that it was throwing in the towel on its attempt at siphoning off customers from Apple’s ecosystem, the can’t-give-them-away Zune.

And in the end, the ecosystem is what it’s all about. Anyone who wants to put a dent in the iOS ecosystem has their work cut out for them for the foreseeable future.

Updated to correct the availability date for iPhone 4S.