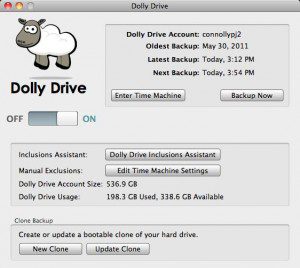 Cirrus Thinking’s Dolly Drive is a simple-to-use backup tool that allows Mac users to replace locally-attached devices that use the Time Machine feature of Mac OS X with cloud-based backups. It, in essence, bolts onto the Time Machine infrastructure and provides a Blowfish-encrypted backup link to the Dolly Drive servers. Users interact with Dolly Drive as they would an ordinary Time Machine backup; as I found, this approach has its drawbacks as well as advantages.

Dolly Drive 1.2.1, which I tested, lacks any manageability features; this isn’t surprising in a tool that’s built on the consumer-grade features of Time Machine, but means that Dolly Drive may not be a great choice for business use.

For basic operations such as backup and restore, Dolly Drive performs as well as can be expected, given the latency involved in an over-the-WAN data transfer. The software doesn’t always respond as quickly as one would hope; when testing Dolly Drive, I noticed a lag of several seconds when switching views in Time Machine from one incremental backup to another. Worse, when first entering Time Machine, a Sandy Bridge-based MacBook Pro with about 230GB of data took a noticeably long time to contact the remote server and present the view of available backups. Some of the blame for this issue, I should note, lies more with Apple’s implementation of Time Machine than anything else.

For an initial backup run with Dolly Drive, it might be wise to take advantage of the company’s seeding program, where an external drive is sent to the customer, who then performs a local backup and returns the drive to Cirrus Thinking. Once that’s complete and the data loaded into the cloud, automatic backups run as they would with the native Time Machine software settings. For my test, I took advantage of the dedicated 20Mb/sec link of the eWEEK Labs facility in San Francisco; at that rate, it took about four days to back up the entire disk across the cloud.

But even when making allowances for network latency, the software still feels a little raw. I noticed my test machine hanging several times when using the Dolly Drive Inclusions Assistant to narrow the scope of backups, and it took over half an hour to calculate the amount of data on my test system’s disk volumes – one native Mac OS X partition and one reserved for BootCamp – information that is immediately accessible through the operating system’s Get Info command. To be fair, this is another instance that may have more to do with the Time Machine APIs rather than anything that Dolly Drive is doing.

One thing that grinds my gears, without fail, is inconsistency in the user interface, and Dolly Drive succeeds on that front. The Dolly Drive pane in System Preferences refers to the inclusions tool as the “Dolly Drive Inclusions Assistant,” but selecting that tool brings up a window titled “Dolly Drive Assistant” that presents users with a graphic with the words “Dolly Drive Backup Assistant” – Cirrus Thinking needs to pick a name for this feature and stick with it.

Another UI bone I have to pick with Dolly Drive is that it doesn’t replace the Time Machine icons in System Preferences and the Mac OS X Dock, although it does manage to interact with the Time Machine icon in the menu bar. Although one can argue whether this is a good thing or a bad one, it will certainly confuse those users who will consider Dolly Drive to replace Time Machine, rather than supplement it.

In short, Dolly Drive is a great idea that needs a bit of work before I can give it an unqualified recommendation. It’s ambitious, but that ambition is the victim of an inconsistent user interface and a reliance on APIs that were designed for directly-attached and locally available storage, instead of the additional latency of a WAN link. Although the service’s pricing – starting at $10 per month for 250GB of online storage – is reasonable, it’s possible that with the introduction of backup via Apple’s iCloud service, Dolly Drive’s time may already have passed.