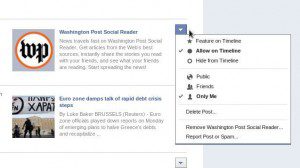 Facebook’s ongoing evolution, the latest phase of which was on display at the social networking giant’s F8 conference last week, merits the attention of enterprise IT departments, in part because, as Salesforce.com’s recent Dreamforce conference illustrated, today’s consumer-targeted social features have a way of turning up in tomorrow’s enterprise applications.

More important, though, than affording IT a peek at what might be to come in the products they purchase and support, is the opportunity a changing Facebook offers us for getting a handle on the way that these software changes help or hinder user adoption. As shiny and new as social enterprise application features may be, your deployment will be dead in the water without user buy-in.

The current crop of Facebook changes, which include new ways of surfacing users’ own content (the Timeline), of sharing minute details from around the Web (Open Graph), and of keeping tabs on friends’ activities in real time (the Ticker), have many users up in arms, and threatening to move their social presence elsewhere.

Many of the complaints boil down to competing strategies for dealing with information overload–with increasing quantities both of social contacts and of information flowing from these contacts, Facebook is experimenting both with more granular controls and with more automated decision-making.

Presented either with too many choices to make or too much automation to accept, some users are opting to throttle their social participation all together. For enterprises dealing with their own information overload, crimping the flow of what is likely to be valuable business information is a less attractive option.

I’m in favor of more automation, based not only on user behavior, but on desired outcomes. So far, Facebook appears to be making good use of user behavior, but taking too little notice of what its users intend to achieve through the service. The changes announced at F8 revolve around the assumption that its users wish to broadcast their activities as thoroughly as possible, either automatically or through careful curation.

Perhaps Facebook (and the vendors that follow eventually in Facebook’s footsteps) would find a more receptive audience for their innovations by first taking a page from the book of another platform power, and ask the question, “where do you want to go today?”