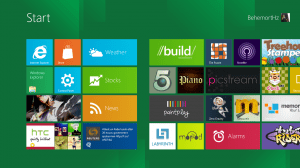 I’ve spent the last few days kicking the tires on the client version of Windows 8, which set me to thinking about the evolution of user interfaces in general. For years (decades, even) the basic constructs of a desktop, garbage can and nested file folders have dominated the user interface, no matter what operating systems are in use. Set a Windows user in front of a computer running Linux or Mac OS X and you’ll hear some whining, but if that person can perform the tasks they need to, it’s all good.

But the paradigms of desktop and file system, which make perfect sense for someone who works in an office, may not be as suitable for new users as they once were. Although we may think it’s hard to find an adult who hasn’t spent some time in front of a computer, that’s definitely not the case. My fiancee recently gave me some insight into the obstacles experienced by a large part of society when it comes to adapting to our brave new world.

The future Mrs. Connolly is a librarian; she works in a relatively large metro area in the Ohio Valley, and among her rotating assignments is the Job Shop. This is a room in the library where people can come in to work on job applications when they don’t have a computer at home; users can access career services and databases, and get help from the library staff if needed.

This is the sort of service that libraries are ideally suited to provide, and future Mrs. C. finds it rewarding and trying at the same time. It’s rewarding, because she gets a chance to help people improve their computer skills; nevertheless, it’s trying because many of the Job Shop’s users have had limited experience with computers, if they have any at all.

That’s a real problem, because so many employers have shifted to online job applications. Someone who isn’t used to working with drop-down menus and the distinction between radio buttons and check boxes is likely to find the whole thing formidable and discouraging. Even McDonald’s has shifted to online job applications, and if you want to be the fry guy, you’d better know that a click and a right-click are not the same thing.

The desktop and file folder paradigms have been with us for over 25 years, and in that time, they’ve worked – mostly well – for the majority of users. But explaining these to someone who’s never worked in an office or never had a desktop to call his or her own might be asking for an awfully great leap of understanding; in effect, they are a digital underclass.

Mac OS X and Windows 8 are taking vastly different approaches to the problem. Apple’s solution is to make Macs work more like an iPhone; such functions as scrolling and resizing may be counterintuitive to those of us who’ve used computers for years, but they make sense if the only device you’ve used is based on a touch screen.

That’s nice, but it’s a drastic overhaul of the user interface. Windows, on the other hand, has maintained a fairly consistent approach throughout its history, with occasional innovations such as the Start menu of Windows 95, or the Start screen of Windows 8.

This conservative approach to UI innovation has a lot to offer; for one thing, it makes support a good deal easier when the differences in behavior from one version of an OS to another can be minimized. It doesn’t advance the state of the art beyond people’s comfort zone, as the iOS-ification of Mac OS X is likely to do. That’s exactly what Microsoft’s customers want: something that works as well at home as it does at work, that doesn’t change drastically from one year to the next.

I don’t know that there’s a right answer to the problem of balancing ease of use, innovation and consistency, but if there is, Windows 8’s user interface might be it.