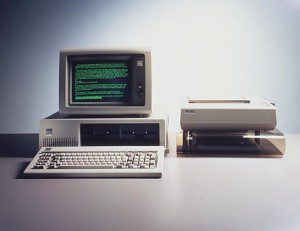 It was thirty years ago today that IBM released the Personal Computer model 5150; although it may not have been the first computer marketed at the individual user, it certainly set the stage for the widespread adoption of computers by ordinary office workers and consumers.

That first IBM PC was designed in an era when computer memory and storage were measured in tens of kilobytes. Since then, a combination of Moore’s Law and good-old-fashioned engineering know-how has led to machines that in their capabilities are far beyond anything imaginable in the early 1980s.For example, the machine on I’m writing this has 8 million times the memory capacity of the first PC. Or, considering the dollars-and-cents angle, for the inflation-adjusted cost of the 5150’s low-end stock configuration of 16KB and two 5-1/4-inch floppy drives, I can today purchase a Mac Pro with 6GB of RAM, a 1TB hard drive – IBM didn’t offer hard disks in its first PC – and dual six-core processors.

What made the 5150 special isn’t the hardware; even by the standards of the day, its components were pretty much off-the-shelf, commodity parts. Instead, its noteworthiness stems from its place as the machine where so many things came together: Intel’s CPUs, Seagate’s drive technology, an operating system from Microsoft, and IBM’s marketing muscle. Because IBM was so skittish about the possibility of antitrust charges – and given the company’s history, rightly so – the company allowed system cloners to gain a foothold in the PC market; by 1987 or 1988, the cloners weren’t just keeping pace with IBM, they were advancing the market.

So when I head out to Happy Hour tonight, my first toast will be to the model 5150. By today’s standards, it’s one step above a mechanical adding machine, but it’s impossible to imagine what business and consumer computing would look like today without it.