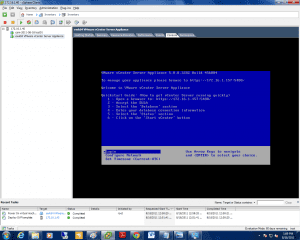 [WP_IMAGE]First, to be clear, vSphere 5.0 has two choices for implementing vCenter Server. One works, and one still needs some work.The vCenter Server that works is the traditional vCenter as it has been shipped for several versions of vSphere. This version is installed on a Windows Server system. It works, so there isn’t much more to be said, except that this is the version that I recommend to IT managers.The new vCenter Server Appliance, which is imported from an OVF and is a virtual machine running on SUSE Linux has not worked well in eWEEK Labs tests. In the comings and goings of looking at the other new features in vSphere 5.0 and with new versions of the appliance becoming available throughout the testing process, I didn’t see a stability problem until this week. You can read my vSphere 5.0 review at eWEEK.com Basically, the vCenter Server Appliance service stopped every night, and sometimes several times during the day. Hitting the “update” button brought down a 4GB update. There is very little documentation for the appliance. And our troubles were complicated by the fact that vSphere 5.0 was released at the start of VMworld in Las Vegas. For those reading this posting in the future, I’m filing this on the Friday before Labor Day.Thus, the release of the first version of vCenter as an appliance occurred in a perfect storm of circumstances that thwarted a good first experience.As of today, eWEEK Labs has fallen back to the traditional vCenter installed on a Windows Server installation. I think the virtual appliance is a good idea but at this time I cannot recommend using it.