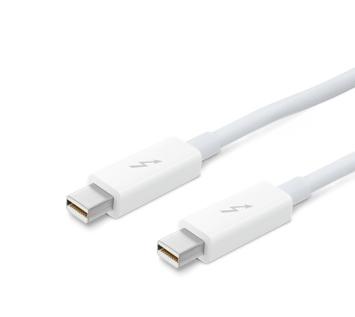 The calendar says that it’s summer, which means that we expect to see some action on the latest thing in device connectivity, Thunderbolt. Formerly known as LightPeak, the technology has the potential for 100-gigabit throughput thanks in part to its combination of DisplayPort and PCI Express technology. Apple earlier this year became the first vendor to ship computers with the high-speed interface, and Sony has just started to roll out its first Thunderbolt system, the Vaio Z. (To be truthful, it’s the Vaio Z’s docking station that supports Thunderbolt, not the computer itself.)

Until this week, there’s been little sign of the other side of the device equation. Promise Technology began taking orders for its line of Thunderbolt disk arrays this week through the Apple Store, and long-time Apple storage vendor LaCie is expected to offer external Thunderbolt drives later this summer. But I’m still coming up short in my hunt for the cables to connect such devices.

So far, Apple seems to be the only vendor so far to be offering Thunderbolt cables (2m for $49), but then again, it’s the only vendor shipping Thunderbolt systems this side of the Atlantic. (Sony’s Vaio Z has begun to show up in the UK, and is expected to be released in the U.S. in the next month or so.) Although I see adapters to connect Thunderbolt ports to all sorts of video devices from online sources such as Monoprice, the relatively limited options available so far lead me to conclude that the market for Thunderbolt won’t take off until the end of this year at the earliest; 2012 is far more likely to see broad support for the I/O technology.

But no matter how much promise a technology holds, it’s not going to go anywhere without community buy-in. Seeing as Intel’s the inventor of Thunderbolt, it’s the company’s responsibility to give developers the information they need to create exciting products, and so far, it’s failed to do so. Intel promised to release a developer kit for Thunderbolt this quarter, but if that’s happened, I can’t find it. We’ll know tomorrow just how serious Intel is about supporting Thunderbolt; so far, the absence of a dev kit suggests to me that the company’s not terribly spun on the idea.