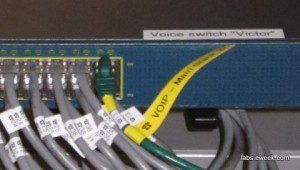 (This is continued from yesterday.)

Labeling patch cords is a must, even in a multicolored wiring scheme. In our old building, where we shared the patch closet with other organizations, we had a hot mess of gray cords and you couldn’t find your way from the panel to the switch if your life depended on it; I once compared it to a squid that ate a bucket of spaghetti and exploded. In the new digs, I implemented a rudimentary labeling scheme where one range of numbers is used for phones, another range for production data, a third is reserved for the lab’s use on the patch panel, and a fourth for the lab’s use in the server cabinets.

In previous situations, I used a label code on patch cords as a form of inventory control; in those cases, each label indicated color, cable type, length, and contained an incrementing number field. For this setup, I restrained myself and used a simple number code, because only a handful of patch cords need to be more than a few feet long.

I used an icon of a telephone or a computer or the letter “L” to distinguish between the first three categories (voice/data/labs), while the cords in the server cabinets are simply numbered from 500 on up. I also tag certain cords with descriptive labels in addition to the numbering series I’ve described. These identify the most important pieces of equipment, particularly in the rack with the production servers and switches. Again, the goal here is to be able to troubleshoot with ease, even if you’ve never before been inside our server room.

(Documentation of all of this work is, as you might expect, on my plate as well and I wouldn’t have it any other way. In the next month or so, time permitting, I’ll dust off my Visio skills and make up a proper set of diagrams; for right now, it’s enough to have a list of which cords go where and an explanation of the color schemes for the production and lab networks. These will be posted in the server room near the patch panel for easy reference, with copies on file here and with our IT department in New York.)

The lifesaver award for this project goes to a gadget that I bought on my own dime back in February, when I got serious about this project. I have used Brother’s P-touch label makers for years, and I’ve always been happy with the results. This past winter I decided that I would, as a belated Christmas present, buy myself a PT-7600; this is a hand-held, semi-rugged label printer that’s been available in the U.S. for two or three years. It uses Brother’s TZ series of label tapes, which include a wide range of colors and adhesive types. Unlike the TC labels, which I’d used for years for lack of anything better, the flexible TZ labels can be wrapped around a cable or applied as a flag, and they will stay put.

The other feature of the PT-7600 that makes me go “Squee!” is its ability to print multiple copies of a label and increment the label number automatically as it goes. As with any complicated gadget, it took me a little while to figure out the user interface, but in retrospect, it’s really not terribly complicated. Once I had the basics set up, it was a matter of pressing print, and triggering the cutter when prompted. A few minutes later, I had fifty pairs of labels, numbered in sequence and ready to be affixed to the patch cords. A simple parts sorting tray helped me organize the labels by their number, making the peel-and-stick part of the job easier.

I’ve worked on and off on this project over the last three months, and the effort has already paid off, if only in ways that are important only to me. As they say on TV:

Maintaining our image and knowing that we can trace a patch cord from panel to switch without guessing: Priceless.