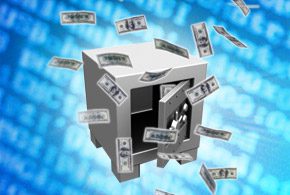 Locked down networks with no direct Internet access could still be infected with malware and have data exfiltrated through a brazen technique that uses the environment’s own security software as a channel to the Internet, according to a presentation two researchers delivered at the Black Hat Security Briefings on July 27.

The technique exploits some antivirus software’s reliance on cloud analysis systems—or sandboxes—to determine if a suspicious program is considered malicious, according to the two researchers who work for security services firm SafeBreach.

The technique is not about infecting a system in a network—it assumes that a system has already been compromised—but about copying data from a system that is not otherwise connected to the Internet. So-called “air gapped” systems are common in the military and sensitive government agencies, but are still often connected to internal systems, such as servers that maintain antivirus software and operating system patches.

To communicate with attackers’ servers on the Internet, a compromised system could generate throwaway viruses that would get sent to an antivirus system’s cloud, and from there, execute in the sandbox, using one of many types of covert channels to exfiltrate data, according to Itzik Kotler, chief technology officer and co-founder of cyber-security service firm SafeBreach.

“We are able to abuse the way that the antivirus is working,” he told eWEEK. “When the service sends a new malware sample to the cloud, we can piggyback by embedding information into a malware sample and code the executable to send information from the sandbox server.”

Kotler and a SafeBreach colleague, vice president of security research Amit Klein, found that at least four antivirus companies had cloud sandboxes that could be abused to allow the transmission of data.

The technique splits a malware payload into two pieces. The main “rocket” infects a system inside the network through some mechanism and a “satellite” that is loaded with sensitive data and then released with the intent that the antivirus client detects the program and sends it to the sandbox for analysis.

As defenses become more complex, attackers need to adapt by finding more novel ways to bypass the defenses. While there is no evidence that the satellite technique has been used by attackers, attackers have used operating-system and software update services to infect systems. The spread of the NotPetya malware through an update service for Ukrainian financial software is the latest example of such an attack.

“I don’t think we will ever have a clear answer to whether this has been used,” SafeBreach’s Klein said. “It is not an easy question to analyze over the years that sandboxes have been used by antivirus vendors.”