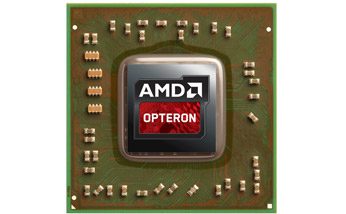 Advanced Micro Devices is introducing a new x86-based Opteron series of chips aimed at the burgeoning low-power microserver space, even as the vendor prepares to roll out new ARM-based products for such systems starting in 2014.

AMD’s new Opteron X-Series offerings—formerly code-named “Kyoto”—are highly dense and energy-efficient processors designed to challenge Intel’s low-power Atom chips in a microserver market that is fueled by the rise of cloud computing and the growing demand for greater energy efficiency in the data center.

Cloud computing and the rise of mobile devices are changing the compute demands in data centers, according to Andrew Feldman, corporate vice president and general manager of AMD’s Server Business Unit. More often, servers are being asked to run massive numbers of small, highly parallel workloads, rather than large applications that require huge amounts of computing power, Feldman told eWEEK.

The new Opteron-X chips—the X1150 and X2150—target smaller microservers that run those lighter workloads, and are aimed at such tasks as Web hosting, big data and multimedia, he said.

A growing number of server makers are pushing microserver efforts to meet the demand for low-power, highly dense systems from a range of customers, including service providers and Web 2.0 companies like Facebook and Google, for such jobs as Web hosting and cloud computing. Hewlett-Packard in April launched the first of its low-power Project Moonshot servers, which initially will run on Intel’s Atom platform but then expand to include systems-on-a-chip (SoCs) from AMD and ARM partners. Dell is developing similar systems.

In a meeting with eWEEK, Feldman showed off a Project Moonshot motherboard armed with Opteron-X chips.

For chip makers, microservers will become a highly competitive market. Intel last year rolled out its “Centerton” Atom SoCs, the first aimed specifically at microservers, and later this year will release its next-generation “Avoton” chips. ARM officials believe their low-power SoC designs, which are found in most smartphones and tablets, can fit well in microservers, and partners such as Calxeda and Marvell Technologies already are selling 32-bit ARM-based chips for server deployments.

AMD executives have identified microservers as a key growth area, and not only will sell the Opteron-X chips, but starting next year will make ARM-based microserver SoCs on ARM’s upcoming 64-bit ARMv8 designs. The change to adopting the ARM architecture last year was a significant move by AMD, which until then had spent the past couple of decades competing with Intel in the x86 space. Feldman said AMD has “relaxed our religious commitment to x86,” and AMD officials expect to be a premiere vendor of ARM-based server chips.

The ARM server ecosystem will not only include Calxeda, Applied Micro and Marvell, but also major players like Samsung and Qualcomm. That said, AMD brings with it a history of making server chips, as well as long relationships with systems makers and a significant amount of IP that it can draw on, he said. AMD also understands the financial and technical demands that come with products cycles where chips are upgraded every 12 to 18 months.

“The CPU business is no place for small companies,” Feldman said. “It’s just too expensive.”

He told eWEEK that ARM over the next few years will take significant share from Intel in the server space and hold as much as 20 percent of the market by 2016. ARM’s ecosystem and low-power designs fit well in the changing data centers.

“This new environment is going to have new needs, and the same-old, same-old will not work anymore,” he said.

Intel officials have spoken about their company’s experience in the server space, which already is showing to be an advantage. They have noted that by the time systems with ARM’s 64-bit ARMv8 architecture hit the market next year, they will be competing with microservers already powered by second-generation Atom chips.

“By the end of 2013, we will have four 64-bit Atom products” for different systems, including microservers, Lisa Graff, vice president and general manager of the Datacenter Marketing Group within Intel’s Datacenter and Connected Systems Group, said in April during a press briefing about Avoton.

Feldman said AMD’s x86-based Opteron-X chips also trump Intel’s low-power Atom S1200 SoCs in a range of areas, from single-thread performance to throughput. The AMD chips can hold up to four cores, offer 2MB of L2 cache, include up to 32GB of DRAM and come integrated with 128 AMD Radeon 8000 cores. They are based on AMD’s new “Jaguar” core.

The chips are available immediately, and Feldman said he expects systems powered by them to begin hitting the market as early as June.