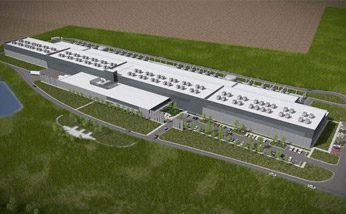 Facebook’s next data center will be a massive facility located in an Iowa town just outside of Des Moines that has about 15,000 residents.

The social networking giant plans to build its fourth data center in Altoona, Iowa, with the goal of breaking ground on the site in the summer and beginning to run user traffic next year. The new data center is coming in anticipation of continued growth for Facebook, which now has more than 1 billion users on its site.

“In the coming years, as our service continues to grow and people share and connect in more ways, we need to make sure that our technical infrastructure also continues to scale,” Jay Parikh, vice president of infrastructure engineering at Facebook, said in an April 22 post on the Facebook blog. “Our goal is not just to deliver you a fast, reliable experience on Facebook every day—we also want to help make connectivity a universal opportunity. Our data centers are essential for making that happen.”

The Iowa data center will be Facebook’s fourth, and its third in the United States. The other facilities are in Forest City, N.C.; Prineville, Ore.; and Lulea, Sweden. The facility will be built on a 194-acre site, with the first phase being a 476,000-square-foot facility that will cost almost $300 million. Reports said the facility could eventually grow to 1.4 million square feet at a cost of almost $1.5 billion.

The data center not only will help Facebook further its business ambitions, but also will be an economic boost to Iowa, according to Gov. Terry Branstad. The company will invest $299.5 million in the building project, which state officials said will generate hundreds of construction jobs, dozens of full-time operations jobs and bolster the tech scene in the state.

“Today’s announcement further solidifies Iowa’s position as a destination for tech companies—from major data center operations like Facebook’s to the innovative start-ups we continue to see popping up around our state,” Branstad said in a statement. “Our productive workforce and our overall cost of doing business help us to win great projects like this.”

The Iowa Economic Development Authority on April 23 approved $18 million in tax breaks for Facebook in return for a guarantee of creating at least 31 new jobs with wages of $23.12 per hour. Local Altoona officials also approved incentives for Facebook.

In addition to the Facebook facility, Gigaom reported April 23 that Google officials said the search giant will spend $400 million to expand its existing data center in nearby Council Bluff, Iowa. The facility supports such services as Google+ and Search, and the money would raise the amount Google has invested in the site to $1.5 billion.

With the Facebook data center, both company and state officials spoke about the energy-efficient technologies that will go into the new facility and said the access to wind power was a key reason for choosing the site. In his blog post, Parikh said the data center will offer the same outdoor air-cooling system the company now uses in its other facilities, and will “also incorporate evolutionary improvements to the building design, networking architecture and more. When complete, Altoona will be among the most advanced and energy-efficient facilities of its kind.”

In addition, the data center will be populated by servers designed through the company’s Open Compute Project. Facebook, like other such Web 2.0 companies as Google and Amazon, runs large, dense data centers and needs highly energy-efficient servers and other data center resources—from power supplies to networking products—that can handle massive amounts of small workloads.

Facebook, which began building its own servers in 2009 using off-the-shelf components, kicked off the Open Compute Project two years later when the company open-sourced the server and data center specifications it employed in building its Oregon data center.