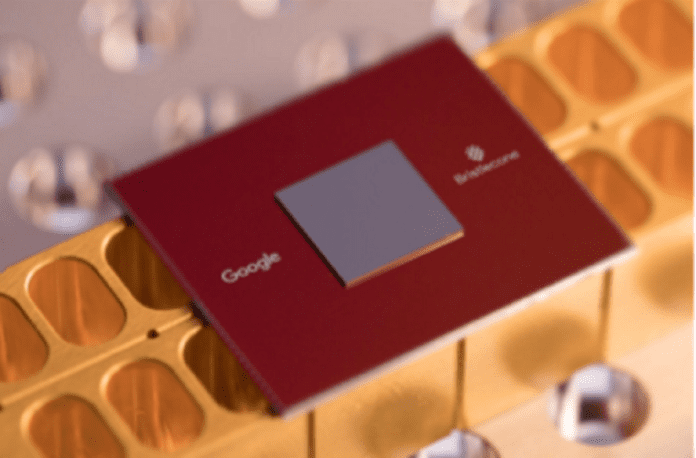 In the world of quantum computing, the number of quantum bits, or qubits, that a processor can handle is one important metric of how powerful it is.

By that measure, Google this week established a landmark of sorts in previewing Bristlecone, a new 72-qubits quantum processor.  The processor surpasses a 50-qubit system that IBM announced last November and which till now was the largest quantum processor.

Google’s announcement, at the American Physical Society meeting March 5 in Los Angele, takes the company one step closer to its goal of demonstrating ‘quantum supremacy’, where a quantum computer can perform a task that a classical computer cannot.  The company has said it thinks quantum supremacy can be easily demonstrated with a 49-qubit processor so long as certain other technical conditions are achieved as well.

“We believe the experimental demonstration of a quantum processor outperforming a supercomputer would be a watershed moment for our field,” said Julian Kelly, research scientist at Google’s Quantum AI Lab. “[It] remains one of our key objectives,” Kelly said in a blog March 5.

Quantum computers operate on the laws of quantum mechanics. They are designed to take advantage of the behavior of atoms and subatomic particles to address computational challenges—such as those involved with exponential scaling—that even the most powerful current supercomputers cannot successfully process. Areas where such computers could play an especially significant role include medicine and chemistry and applications that require a high degree of optimization.

Unlike classic computers that encode information in bits with a value of either 1 or 0, quantum computers use qubits to encode information. As IBM explains in this primer qubits operate on two principles of quantum physics known as superposition and entanglement.

“Superposition means that each qubit can represent both a 1 and a 0 at the same time,” according to IBM. “Entanglement means that qubits in a superposition can be correlated with each other.” In other words, the state of one qubit, whether it is a 1 or a 0, can depend on the state of another. Together, these two properties allow for computers that can function in ways that current generation classic computers cannot, according to IBM.

But for quantum computers to successfully handle computational challenges that are beyond the scope of current systems, a large number of qubits alone is not enough. Crucially, the processor must also have low error rates when operating, Kelley said.

The same properties of physics that enable quantum computing also make it extremely fragile and prone to errors, especially when the quantum computer has to interact with the external world—like when a user wants to run a program. Google has not disclosed the error rates with Bristlecone. But the company has noted that if it can achieve a two-qubit error rate below 0.5 percent on a 49-qubit system, it can demonstrate quantum supremacy.

“We believe Bristlecone would then be a compelling proof-of-principle for building larger scale quantum computers,” Kelly said.

Google is one among a handful of technology giants in the race to build quantum computers capable of handling supercomputing-scale tasks. Others in the race include IBM and Intel.