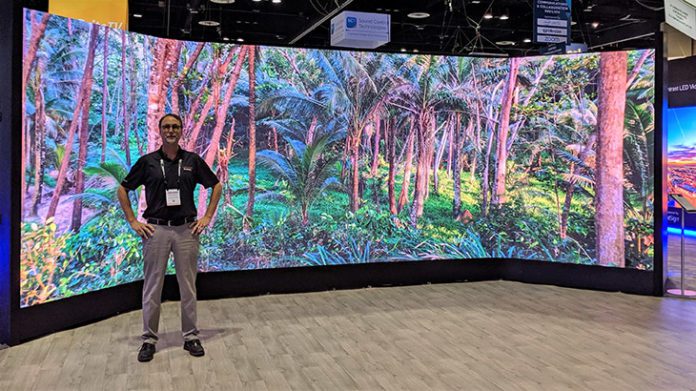 NVIDIA held its virtual GTC conference, and it was particularly fascinating. One session hit me where I live, though. It was by Kathryn Brillhart, Director of Virtual Production, Entertainment Technology Center, USC Cinematic Arts. She talked about how using large LED walls, NVIDIA’s Omniverse technology, and a ton of creativity created better, faster and cheaper movies. But what occurred to me as this could make acting a ton more fun, too.

I spent four years trying to be an actor in my youth, and what finally killed the career path for me was the realization that I’d never enjoy movies again. Like many of you, I enjoyed watching a movie and losing myself in the story, but the process of acting is like learning how magic tricks are made, mainly if you are working with green screens. As I became more familiar with the process, I lost the ability to enjoy movies or TV shows. More critical, acting without seeing what the audience would see or getting my head into the scene indeed was problematic, so I moved on.

But Kathryn convinced me that she might have fixed my problem, and while it is unlikely I’ll go back to acting now, I might reconsider that career choice if I was younger. One other thing that occurred to me is that these LED walls could make for exciting virtual collaboration spaces.

An LED Wall is a flat-panel TV that’s as big as a wall. Kathryn showcased an implementation with four walls, three in front of the camera and one over it. Using low-resolution images and upscaling or digital replacement allowed the actors to feel more like they were in a real place, with no green screens, and allowed the director and technical staff to manipulate the real and virtual props better seamlessly. You can get a sense of what I’m talking about here.

If you recall the Star Trek Next Generation Holodeck, the result isn’t that dissimilar about surrounding images. I could see instances where you could use this to intermix virtual characters with living actors in a far more realistic way than the typically used constructs. I know I’d be far more realistically scared in front of a natural-looking dragon (thinking of Game of Thrones), than the typical actor with a construct on his or her head.

So the actors get a more realistic experience. The director can see the blended shot without using some virtual viewer. You can even use rendered actors and props to lay out the shot and work on camera angles before the actual props and actors are even engaged. With upscaling and a variety of the NVIDIA Omniverse tools, this should increase the effort’s quality, reduce the time it takes to shoot the movie and edit it, and more realistic acting from a broader range of talent.

But now, imagine if LED walls were used in the office.

When I bought my first plasma TV, it was nearly $11K, adjusting for inflation.  You can buy a better flat-panel than I had back then for $150 on sale today, showcasing how dramatically prices can drop with volume. I point out that doing LED offices would be wicked expensive, but that cost would drop significantly if this became popular.

Now imagine having a room in your house with three or four LED walls (I don’t think you’d need to do the ceiling). When you walked into the room, you could specify a location in the world, and your view would be from a virtual cubicle or office at that location, including window views. It would look, and with the right ceiling-mounted speakers, sound like you were in that remote location. You could talk to the person working next to you, and that sound wouldn’t carry to other workspaces; that person could mute you, which isn’t possible in a physical space. When joining a meeting, you could pivot your chair and table up to the wall, and it would look like you were at a continuous conference room table.

And remember, this could be instantly any place in the world you’d want to be. No pandemic risk, and the manager could even look virtually across all of their employees, much like they would in the office, and have similar oversight levels to what they’d have in a physical office. You could even populate your virtual office with paintings, windows into strange places (one could be under the ocean, another on mars, and yet a third looking into the bat cave) when you weren’t collaborating.

The LED wall office could be the near-perfect way to blend the feel of being in an office with all of the benefits of working from home.

With tools like NVIDIA Omniverse, there is the potential to create representations of real and imagined places to explore virtually. But with LED-Walls, we approach the promise of the Star Trek Holodeck. We can begin to see how you could create a blend of in-office collaboration and camaraderie while retaining the work from home convenience. These combined technologies will not only make visual entertainment better, faster and cheaper, but they could also finally render going to a physical office obsolete.

Ironically, at about the same time, we’ll have autonomous cars to drive us to the office; based on NVIDIA Technology, we could also no longer need to go there because of NVIDIA technology. Given I’m not a big fan of traffic, I’m OK with that.