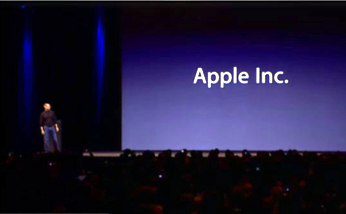 A mere five weeks later, on Oct. 26 — three days after launching the iPad Mini — the stock zoomed south and finished the trading week at $604.00, down a whopping 14 percent in a blink of an eye.

Fourteen percent of Apple’s $567.3 billion market cap is a ghastly $79.4 billion. That’s a lot of apples to lose, even on paper.

Several opinions can be deduced from these actions. Here are three of them:

a) Apple’s merely in a little stock slump. Happens all the time to all companies.

b) Apple should stop releasing new products for a while. (Um, don’t think THAT’s gonna happen.)

c) Apple’s stock has seen the Promised Land ($700), is already satisfied, and is turning back. It’s reached its zenith and has nowhere to go but back down the mountain.

It also could be none of the above.

Analysts All Over the Board

Analysts are scratching their heads on this one with mixed opinions, especially after the company — the world’s most valuable by market capital — earned $8.2 billion in profits on revenue of $36 billion this last quarter. And the holiday-season quarter waits just ahead.

A profit of $8.2 billion seems, um, fairly successful and a reasonable return to investors, don’t you think? So why the stock plunge? Is it all about “guidance,” which is simply Wall Street for “guess”?

Best Quarter in IT History to Come?

A $52 billion revenue quarter would be the highest in history by an IT company. Impressive, indeed. But Apple has a history of setting conservative guesses and then blowing right by them. That would seem to be a logical and safe strategy. Better to beat the numbers every time out, if at all possible. Right?

Wrong. At least for the stock in the last several weeks. In fact, the stock plunged down below $600 this week — the first time since July 30 — right after the quarterly report was issued. It’s now barely above that mark: 98 bucks lower than it was on Sept. 19.

Perhaps the stock price is due to factors outside the company’s control. “AAPL will not be immune to the undercurrent of economic sluggishness, especially in the consumer space, where higher gasoline prices are leaving consumers with little money for their next favorite gadget,” Chowdhry said.

Equities analyst Peter Misek of Jefferies & Co wrote in an advisory that “the revenue guidance is close … (but) we think will be too conservative. Bears will likely point to possible higher costs associated with the iPhone 5 and iPad mini, but we expect the stock to outperform on the back of reduced iPhone 5 bottlenecks and strong iPad shipments.” Misek calls AAPL a “buy,” despite the current tailspin.

Here’s yet another take: “We believe the soft December quarter guidance was primarily due to lower gross margins, given Apple anticipates that new and re-priced products will comprise 80 percent of December quarter sales, and new products tend to have lower gross margins during the early stages of production,” wrote Canaccord Genuity technology analyst Michael Walkley.

So there you are: more educated guesses.

My favorite theory, however, is this one, put forth by Chowdhry: “It does seem to us that companies (Apple customers) may have pulled back on giving free iPads and probably also free iPhones to its employees.”

The most creative guess of them all might be right on the mark.