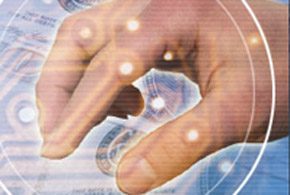 Windows 8 and the Kinect motion controller are just early glimpses of a touch-, voice- and gesture-based future that Microsoft believes will become commonplace over the next five to 10 years.

For a clearer look at how Microsoft expects personal computing to evolve, the software giant is showing off newly rebuilt and freshly opened Envisioning Center at its Redmond campus. The facility gives visitors some hands-on time with devices and technologies under development from the Microsoft Research and Office Labs. It also doubles as a laboratory for the company’s engineering teams, said Microsoft in a statement.

As illustrated in a YouTube video released by the company, PCs are out—or at least artfully obscured—while tablets and video walls are in. And don’t bother looking for a keyboard, cursor or command line interface. Fluid, modern and graphically rich interfaces and touch-enabled devices will be the order of the day.

Soon, office workers will brainstorm on smart whiteboards that take up an entire wall, execute commands by uttering a few words and seamlessly share information across devices with a flick of a finger or by touching devices. At home, families will gather in front of super high definition, 4K screens for video calls and movie-theater like experiences.

Jonathan Cluts, director of Microsoft’s Strategic Prototyping team, stresses that despite the high-tech movie set-like surroundings, the Envisioning Center is very much anchored in the real world.

“We want to excite customers about the direction we’re heading in and show that we are constantly thinking about new scenarios based on trends and real work in Microsoft Research and the business groups. These scenarios are based on reality, not science fiction,” said Cluts in a company statement.

Scenarios include a smart kitchen that can “see” an ingredient, suggest recipes and guide the meal’s preparer to the completion of a dish. It’s a test bed now, but it’s rapidly approaching commercial reality.

Microsoft is banking on technologies like cloud computing and its wildly successful Kinect sensor to pave the way to intuitive, frictionless and ubiquitous computing experiences. Judging by the runaway success of the Kinect, Microsoft could be on the right track.

Kinect first appeared as a hands-free controller for Microsoft’s Xbox video game console but it quickly became a favorite among hackers and do-it-yourself technology enthusiasts.

Soon after launch, hackers flooded YouTube with videos showing how sensors along with some code and additional hardware could do a lot more than control video games. Early projects included a 3D holographic mapping system and MIT Personal Robotics Group’s KinectBot, a robot that could navigate and map its surroundings in 3D.

Encouraged by the Kinect’s popularity, Microsoft released a Kinect SDK and a version of the Kinect for Windows PCs. It’s experience with Envisioning Center suggests that the company has gained insights into how the technology can be incorporated into business workflows and home settings. Time will tell if Microsoft made the right bet.