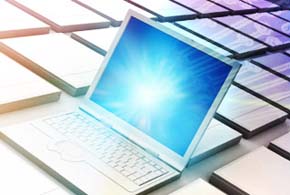 Google has given its Play store a fresh new look for desktop Web users, bringing in the user interface it introduced back in April for Android users.

The new design, which introduces large icons for apps, music, ebooks, magazines and other content, also provides large clickable links to help visitors find and discover the content they are seeking.

“We’ve changed a few things,” says the message on the Play store home page, after the updates went into effect on July 15.

“The redesigned Google Play store on #Android devices is now on the web: goo.gl/DPiDq,” said a Play store post on Google+. “Play like never before with our fresh new look.”

Users can navigate the new site using a category “menu” on the left side of the screen. There also appears to be more white space on the site, giving it a less cluttered look compared with the former store. That does, however, mean that it likely takes more scrolling and navigating to find your desired content.

Back in April, Google had redesigned the Play store Android app to make it easier to use and to display more content on smartphone and tablet screens. The brighter, image-centric look was released for devices running Android 2.2 or above. That look has now made the transition to the Web for desktop users.

Also in April, Google gave the Play store new capabilities that made it easier for developers to showcase their apps to attract buyers for their products. App developers can now upload screen shots of their apps running on 7-inch and 10-inch tablets so consumers can see what those apps will look like on their similar devices, which Google and the developers hope will spur even more sales of innovative and useful apps in the store.