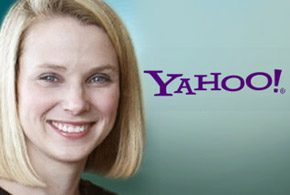 As Yahoo continues to rebuild itself, CEO Marissa Mayer, the former Google executive who was hired to head Yahoo back in July 2012, has made a lot of changes within the company, from banning employees from working from home to shuttering the AltaVista search engine.

But none of Mayer’s changes might be as big as a project she’s reportedly working on right now—an effort to get Apple to drop Google as the company’s default search engine on its devices so it can be replaced with Yahoo Search.

The behind-the-scenes work by Mayer with Apple executives was reported April 16 by Re/code, based on interviews with inside sources. Yahoo wants to continue to build on recent good economic news, the report stated, and “the lodestone of two internal projects aimed at building a viable mobile search engine and monetization platform is to convince Apple to make Yahoo the default search engine on its Safari browser on the iPhone and iPad.”

Even though Google is presently the default search on Apple mobile devices, users have the freedom to change their preference to Yahoo or Microsoft Bing by manually adjusting some device settings.

“Mayer aims to change that,” the Re/code report states, again citing Yahoo internal sources who said that “her plan to pitch Apple on the idea as its marquee mobile search partner is far along. The company has prepared detailed decks, including images of what such a search product would look like, and hopes to present them to Apple execs.”

Despite the rumored footwork by Mayer, no deal has yet been reached, the report stated. “Still, several said Mayer has already buttonholed a few Apple executives on the topic, including its powerful SVP of design, Jony Ive, who knows the former Google exec well.”

The situation will be one that Google and Yahoo observers are certain to follow in the coming months as it plays out.

Mayer, meanwhile, has made quite a few moves at Yahoo since arriving at the company.

In July 2013, Yahoo shuttered the AltaVista Web search engine, which gained millions of users and great fanfare in the mid-1990s, as the company continued to pare down its non-core products and services under Mayer. Interestingly, that wasn’t the first time that Yahoo had planned to cut AltaVista, which it acquired in late 2003. Back in December 2010, Yahoo had proposed to shut AltaVista as part of an earlier product-winnowing effort, according to a 2010 story from The Wall Street Journal.

AltaVista was developed in 1995 by a group of scientists at Digital Equipment Corp.’s research labs and was opened to the public in December 1995, according to a history of the search engine from WebHostingReport.com.

Also cut by Yahoo at that time were several other services, including Yahoo Axis, Browser Plus, Citizen Sports and Yahoo WebPlayer. Yahoo FoxyTunes, RSS Alerts and Yahoo Neighbors Beta were shuttered as well.

In February 2013, Mayer introduced another big—and controversial—change at Yahoo when she banned employees from working from home. In a memo at the time, Mayer wrote, “To become the absolute best place to work, communication and collaboration will be important, so we need to be working side by side. That is why it is critical that we are all present in our offices. Some of the best decisions and insights come from hallway and cafeteria discussions, meeting new people and impromptu team meetings. Speed and quality are often sacrificed when we work from home. We need to be one Yahoo, and that starts with physically being together.”

Mayer arrived at Yahoo in July 2012 when she was brought in as CEO and president to try to put Yahoo back on track as a leading, growing and stable Internet company. She hailed from Google, where she was one of that company’s first 20 hires in June 1999 and was the company’s first female developer when it was just getting started.

Mayer was hired by Yahoo after an embarrassing and distracting string of three CEOs came and went in the seven months before she arrived.