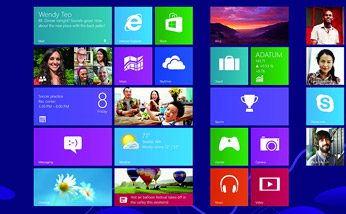 More details surrounding Windows Blue, an upcoming update to Windows 8, have leaked and signs point to a release as early as August along with significant improvements to the operating system’s search capabilities. Just don’t call it a Service Pack.

While Microsoft has remained tight-lipped on Windows Blue, official job postings have all but confirmed its existence. And if the latest news leaks emerging from Microsoft are to be believed, the company may well be on track to deliver Windows Blue less than a year after the official Windows 8 launch. Microsoft first released Windows 8 on Oct. 26 in a splashy series of events in New York City.

Inside sources have told ZDNet’s Mary Jo Foley that Blue has reached a critical milestone. Foley writes, “One of my contacts said that M1 marks the half-way point in the Windows Blue development schedule. The last and final milestone build of Windows Blue will be M2, said this contact, who requested anonymity.”

The Verge’s Tom Warren, citing a post on Win8China, reported that Microsoft plans to allow the public to preview Windows Blue ahead of its release, a longstanding tradition for major operating system and software releases. This Milestone Preview should be gracing Microsoft’s download servers within the next couple of months.

Windows Blue will offer several tweaks and under-the-hood improvements like a faster kernel. Search will be front and center among the significant improvements in Windows Blue. “Features are still being prepared for Blue, but one of the biggest changes is an improvement to the search charm functionality,” wrote Warren.

This refreshed, search-centric version of Windows 8 may benefit from a little corporate synergy.

“We’re told that the Bing team is working closely on Windows Blue to improve search in a significant way,” added Warren. This includes context- and application-aware search functionality that digs deeper into apps, enables quick previews, and in certain cases, launches the corresponding app.

Other updates include a new browser, Internet Explorer 11 and support for 7- and 8-inch tablets. Windows Blue is expected to carry over the tiled interface, but with added customization options. As with Windows Phone 8, Blue will allow users to resize their Live Tiles. Redmond also plans to continue to “flatten” the desktop interface and rid it of the last vestiges of the visual gloss that the operating system has accumulated over the years.

In terms of pricing, Microsoft seems to be reluctant to break from tradition. That spells good news for budget-conscious Windows users. Unlike Apple’s OS X upgrades—and in keeping with previous Windows Service Pack releases—Windows Blue will reportedly be available for free.