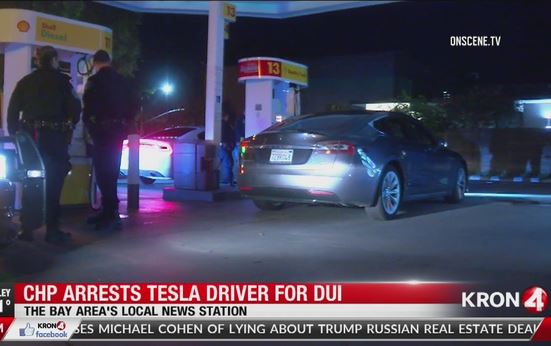 The California Highway Patrol was on the case immediately after seeing a Tesla Model S blowing through the speed limit at 70 miles per hour near Redwood City, but despite their best efforts, they couldn’t get the driver to pull over. The driver of this car seemed to be asleep, and no amount of noise from the pursuing police cars sirens nor the flashing of their lights seemed to stir the driver.

A few miles later, one of the police cruisers pulled in front of the wayward Tesla and slowed down, causing the Tesla to slow down as well, since one of its autonomous features was designed to prevent it from running into a car ahead of it. Once the police got the car stopped, and they managed to wake the driver, they understood what was happening as he failed a field sobriety test.

(To see a larger view of the image at top left, right-click on it and select “View Image.”)

But this wasn’t the first time for California cops. Earlier this year, the Highway Patrol managed to pull over another Tesla running on autopilot. There the driver tested for a blood alcohol level twice the legal limit. This prompts the next question: whether autonomous vehicles should be equipped with a breathalyzer or whether police should be given a remote kill switch so they can rescue a disabled driver whose car is driving on its own.

Other Autonomy Boo-boos of 2018

The Teslas weren’t the only failures of autonomy in 2018. Drone operators near London’s Gatwick airport apparently found a way to disable the geofencing that prevents drones in the UK from flying into prohibited areas, including the controlled airspace near airports. The geofencing is supposed to be implemented in a way that will prevent drone operators from deliberately flying into that airspace.

But shortly before Christmas, it clearly didn’t work as a pair of drones were apparently sent intentionally into the area near Gatwick’s single runway, preventing normal airline operations. The drone incursion went on for nearly 36 hours, stranding tens of thousands of passengers and nearly 1,000 flights. This time, however, we don’t know if the operators were drunk, because so far they haven’t been found.

However, the drones disappeared because the British Army found the ultimate kill switch. Snipers were sent into the area to shoot down the drones, and apparently as soon as they appeared, the drone operators left. A potential solution for the operators of Gatwick might be to invest in a couple of legendary Purdy shotguns, and simply shoot the drones down themselves next time.

One the other hand, autonomy has its uses. Enter NASA engineer Mark Rober, the same engineer who helped design the Mars landers, who became highly annoyed when porch pirates started stealing his packages after they were delivered.

But Rober is not your everyday engineer. He decided that he should be able to find a way to make those thieves pay for their deeds. To do this, he had to design and build an autonomous porch pirate trap that would not only get revenge for the thefts but also record what they were doing.

To accomplish this, Rober built a bait package that could sense when it was being stolen, record video of the thieves, and then, when they opened the package, dispense a pound of glitter accented by the aroma of fart spray. The package had GPS tracking so it could be recovered, and it uploaded the video to the cloud so that Rober could see who the thieves were, even if the package wasn’t recovered. It took Rober seven months of engineering development and testing, but as you can see in his YouTube video, it worked perfectly.

Some of the unexpected events in 2018 didn’t involve autonomy, however. For example, police in New Hampshire attempted to subpoena an Amazon Echo device, assuming that it may have evidence relating to a murder that happened in the same room where the echo was installed. Unfortunately for the police, the Alexa is designed to only listen to what immediately follows its wake word, which is usually “Alexa.”

Unfortunately for Alexa, that’s not always the case, as a German couple found out when hours of their conversations were sent to a stranger. Amazon later explained that this case involved human error and wasn’t the fault of Alexa.

Sometimes technology works perfectly and can turn up unexpected results. Consider the case of Joseph DeAngelo, a former police officer in Sacramento who was discovered to be the infamous Golden State Killer. DeAngelo’s DNA was found at one of the murder scenes, but DeAngelo didn’t have his DNA on file anywhere.

To find him, investigators compared the found DNA with thousands of people in an online DNA database until they discovered some close relatives. Once the relatives were found, the next steps required finding the closest relatives according to the DNA samples, eventually narrowing it down to DeAngelo.

The DeAngelo case demonstrated the power of big data analysis, and it continued to demonstrate it after he was arrested for eight murders initially. Since that arrest, DeAngelo’s DNA has tied him to five more murders, 50 rapes and hundreds of burglaries.

While DNA matches as a crime-fighting tool have been well known since the days of the “CSI” crime drama series, this was the first time investigators were able to use DNA relationships found in a database to find someone whose DNA wasn’t on file. It was a classic example of the power of big data, and it’s been used several times since then.

One thing that these events in 2018 have shown is that technology and the science behind it can have far- reaching effects. In some cases, those effects combine to produce events we never saw coming.