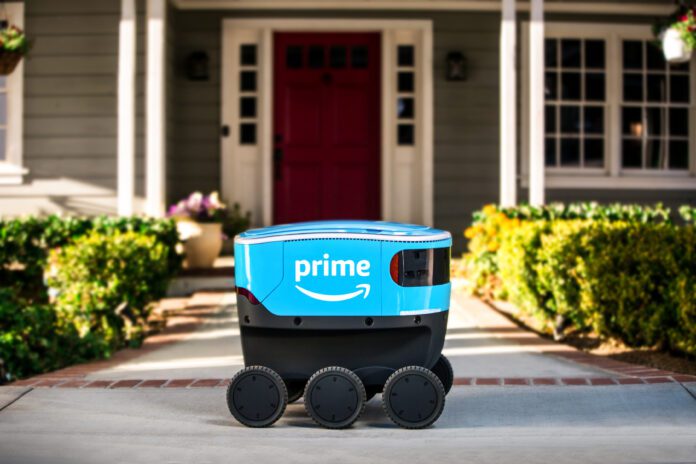 We’ve been hearing stories about airborne deliveries by autonomous drones for a few years now. The Amazon drone is already a staple of technology stories. But it looks like another drone-like delivery method might end up being the one that is actually used.

It’s the delivery drone that Amazon has just announced, called the Amazon Scout (image below). It’s a six-wheeled vehicle about the size of a beer cooler that’s designed to trundle around city sidewalks at a walking pace. The Scout makes its deliveries by rolling up in front of a customer’s house and then opening up a locked compartment to let the recipient take out a package.

Right now, the Scout is being used in Snohomish County, Wash., which is fairly near Amazon’s headquarters campus in Seattle. The company intends for it to deliver packages to any Amazon customer; by doing this, it may replace the existing delivery services that provide this services.

If that somehow sounds familiar, it should. Last year, we reported on the beginning of service in Washington, D.C., of the Starship delivery robot. Like the Scout, the Starship robot (image above) is a six-wheeled autonomous vehicle that also rolls along city streets to make deliveries, primarily of food. Starship is currently providing service in Washington as well as in Redwood City, Calif.

But now, Starship is announcing a big expansion. The company has joined into a partnership with food service company Sodexo to deliver food and other items on the campus of George Mason University in Fairfax, Va., to 40,000 students. The robots are intended to pick up food at local grocery stores, restaurants and campus food service facilities and deliver to students on campus.

Currently, Starship is providing 25 delivery robots for the GMU project. The first deliveries are from facilities critical to student life: Blaze Pizza, Starbucks and Dunkin Donuts. However, other nearby merchants are being signed up, and, of course, the robots can provide food from the campus cafeteria.

Starship says that the GMU deal is the first for a major university, but the company already provides a similar service to some corporate campuses, including Intuit in California.

While these are the first big implementations of sidewalk robots, they’re not the first delivery robots. Grocery chain Kroger has been using autonomous vehicles to deliver in the Phoenix area through one of its Fry’s grocery stores. Fry’s uses vehicles created by Nuro to deliver products over the city streets. The Nuro delivery vehicles can reach speeds of 25 miles per hour, and they operate out of just one store currently.

Walmart is also getting into  autonomous delivery in Surprise, Ariz., also near Phoenix, using vans created by Udelv to deliver products to nearby neighborhoods. Like the Nuro vehicle, this one also drives itself along city streets to make deliveries. Both of these operations began their pilot programs in 2018, while Starship, a technology company from Estonia, began work in 2014.

These sidewalk or road-going delivery robots have several advantages over the drones that have captured the imagination of many. They’re less ambitious than trying to navigate through the airways, they apparently aren’t as annoying, and they’re certainly less expensive. Drone delivery tests in Australia have shown that frequent drone flights produce frequent complaints, primarily because of the noise they make.

What’s probably a much greater advantage is that ground-based deliveries don’t involve the federal government. National regulators have been a significant impediment to drone delivery services wherever they’ve been tested. In the United States, they’re still not allowed, and it’s unclear whether they ever will be.

But those sidewalk and neighborhood vehicles avoid most of the regulatory issues that affect drones that fly. They only have to get approval from the local government, and that’s usually much easier. In addition, the robots only have to learn a relatively small area, which is more likely to be a successful project than areal navigation, which would take place over a larger area.

What’s more interesting is that this sort of “drone” technology is extremely flexible. For example, the Starship delivery robots have a payload of up to 20 pounds, and the road-going robots can carry much more than that. The most that the current delivery drones being tested can carry is a couple of pounds.

Speed of delivery does not appear to be an issue. While drones can fly faster than the sidewalk robots, they have to cover longer distances. As currently envisioned, the sidewalk robots are covering neighborhoods and the road-going deliveries somewhat larger areas. Starship is also talking about a plan in which its robots would be trucked to an area where deliveries are to be made, and then the robots would be released to make the deliveries and then would return to their mother ship.

These aren’t the only autonomous delivery plans in the works. Dominos, for example, is already working with Ford to create an autonomous pizza delivery vehicle. Tests of the pizza deliveries are already under way in Miami and Las Vegas.

While most of the tests of these delivery vehicles have centered around food, there’s no reason such deliveries couldn’t be for other items, and there’s no reason a Starship vehicle couldn’t deliver items such as spare parts or even interoffice mail around a corporate campus. I know the interoffice mail robots have been around for a while, because we had one when I was at the Defense Logistics Agency. What’s new is the use of artificial intelligence to improve their flexibility and usefulness.

Sadly, there’s one gaping hole in all of these delivery plans, and I hope it’s fixed soon. But right now, there don’t appear to be any plans for an autonomous beer-delivery robot.