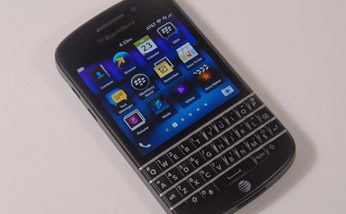 For those millions of BlackBerry users who were used to that keyboard, this was a rude awakening and not one that all BlackBerry users liked. While eWEEK found the Z10’s touch-screen keyboard to be the best of its type, there were a lot of users who really wanted the physical keyboard.

Now they’ll get it. The BlackBerry Q10, which the company originally announced in January when it rolled out the Z10, is finally about to ship to carriers in the United States, giving users a BlackBerry 10 device with a traditional keyboard. But it’s worth noting that this is more than just a Z10 with a keyboard grafted on. The Q10 is designed specifically to be a keyboard-equipped device, and there are differences in the way it works when compared to the Z10.

Many of the core design features of the BlackBerry 10 OS are kept intact, however. The BlackBerry Hub is there to collect your email and messaging. The Q10 still has a touch screen that allows you to peek at the Hub, and most of the other touch-screen features are available as well. The biggest difference: The on-screen keyboard is gone, since there’s a physical keyboard. Also, the text prediction feature has now moved to words that appear on the bottom of the screen instead of in the lines between the keys as was the case with the Z10.

The Q10 is slightly larger than its predecessor, the Bold 9900. And the screen is much larger. Its 3.1-inch AMOLED (Active Matrix Organic LED) screen is a main reason for the larger size, although the keyboard lost one row of buttons and the touchpad as well. The result is a screen that’s very bright and very easy to read. Text and images are sharp due to the 330-PPI (pixel-per-inch) 720-by-720 resolution screen.

The change to an AMOLED screen has required some other changes that users are sure to notice. In an effort to reduce power requirements, many screens such as in the calendar have black backgrounds instead of white as was the case in the past. The black background for some apps is a function of the newly updated version of BlackBerry OS 10.1, which also supports some of the other functions of the Q10, such as keyboard shortcuts.

The new 10.1 version, which for now is only available on the Q10, supports those familiar keystrokes such as pressing the “T” to move to the top of a document or “B” to move to the bottom. These features were missing in the original version of BBOS10, instead handled by menu functions, something that was impractical on the Q10 because of the screen size.

BlackBerry Q10 Delivers Plenty to Like for Diehard Keyboard Fans

The updated OS also restores the ability to perform PIN to PIN messaging, a feature that was removed when BBOS10 was released, resulting in an uproar from BlackBerry users. This type of messaging allows BlackBerry users to send secure, encrypted messages to other BlackBerry users anywhere using only the device’s hardware identifier, but following a format similar to email rather than the chat format used by BlackBerry Messenger.

The Q10 follows the lead of most other smartphones with a pair of cameras. The front-facing 2-megapixel camera is intended for video chats using software such as Skype, which is available for BBOS10.1 and which was installed as beta software on the review device. The rear-facing camera is the full HD 8-megapixel camera that can record 1080p HD video. The front-facing camera can record 720p HD video.

All Q10 devices will support Long Term Evolution (LTE) in addition to 2G and 3G communications. The review device worked as expected on the AT&T and T-Mobile networks using both HSPA+ and LTE networks in the Washington, D.C., metro area. The device supports Bluetooth 4.0 Low Energy, near-field communications (NFC), subject to carrier restrictions.

BlackBerry claims that the Q10 will work in standby mode for up to 354 hours on 3G, which is longer than I was willing to wait. It is also supposed to handle up to 13.5 hours of talk time. I wasn’t able to talk that much, but the Q10 did show plenty of battery capacity, lasting well over 24 hours between charges in normal use with WiFi, Mobile networking and Bluetooth turned on and the GPS in use most of the time.

Like the Z10, the Q10 is a very secure device, and it’s designed for use in a bring-your-own-device (BYOD) environment. To accomplish this, BlackBerry has created a feature called BlackBerry Balance, which allows the phone to operate as a pair of independent devices. The work side of the device is separate from the personal side, and the corporate IT department can control the use of the work side. This means that with BlackBerry Balance you can wipe the data from the works side of the BlackBerry without affecting the user’s personal information.

Overall, the Q10 appeals to existing BlackBerry users while also giving the corporate IT staff a way to keep company information secure. The physical keyboard makes it easier to perform tasks such as email than with touch-screen alternatives.

And despite the physical keyboard, it does have the touch-screen features that users expect, just with a little less screen real estate. If you’re currently a BlackBerry user, this is probably just what you’re looking for. I found the device to be a pleasure to use.

The BlackBerry Q10 will be available from Verizon, AT&T and Sprint by the end of May. It is expected to be priced at $249 with a two-year contract. Pricing and availability from T-Mobile has yet to be announced.