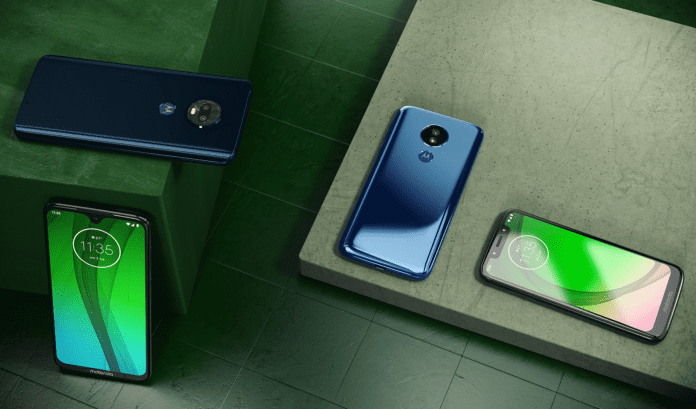 Motorola has launched the seventh generation of its Moto G smartphones, the Moto G7 family, with three of the four G7 models coming to the United States and Canada in the next month.

The phones, the Moto G7, the Moto G7 Power and the Moto G7 Play, are the successors to last year’s Moto G6 handsets, which were unveiled in April 2018. All three new G7 phones run on the Android 9 Pie operating system.

The display of the G7 is protected by Corning Gorilla Glass, while the handset also includes a 3,000mAh rechargeable battery, water-repellency and an 8-megapixel front camera. Other features include a USB-C charging and data transfer port and a 3.5mm headphone jack. The phone will be available in Ceramic Black or Clear White.

The next model, the Moto G7 Power, takes aim at a common smartphone concern—battery life—according to Motorola, a wholly owned subsidiary of Lenovo. The handset includes a massive 5,000mAh battery that promises power for up to 60 hours on a single charge.

Also included is a 12-megapixel rear main camera, an 8-megapixel front camera, a USB-C port for charging and water repellency. The G7 Power is available in Marine Blue and will retail for $249 when it goes on sale in the coming month.

The G7 Play also includes a 3,000mAh battery, a 13-megapixel rear main camera, an 8-megapixel front camera, a USB-C port and water repellency. The phone will be available in Starry Black or Deep Indigo colors.

Charles King, principal analyst at Pund-IT, told eWEEK that the latest Moto G series phones are targeted to buyers with an eye on making sales through very competitive pricing.

“At a time when mainstream makers are pushing the $1,000 envelope for a smartphone, Motorola is offering these new phones for less than a third of that cost,” said King. “I expect the company’s focus on delivering specific high-performance capabilities at very low prices will appeal to a lot of consumers and small-business people.”

Avi Greengart, an independent mobile device analyst, said the new handsets update the company’s Moto series formula with notched displays and updated processors in multiple models to fill different niches. “They will sell, but flaws in pricing and materials leave room for competitors,” he said.

“Lenovo’s Moto G series is the company’s bread and butter smartphone brand: cheap enough to sell in volume to consumers priced out of premium phone tiers, but expensive enough to provide some profit margins,” said Greengart. “The 7 line continues the trend of offering a strong value proposition by combining reasonable hardware with superb software, and the G7 Power should find a niche with consumers who want endless battery life.”

The problem, said Greengart, is that  the G7 is not inexpensive at $299 and the G7 Power and G7 Play suffer from cheap materials and just average imaging. “This leaves room for competitors to undercut Lenovo or match the company on price and offer more premium designs,” he said.

Since their first appearance around the world in 2013, the Moto G handsets have taken on market leaders Samsung and Apple with smartphones that offer competitive and compelling features at prices that have been lower than competing flagship phones from Samsung and Apple. But while their prices have been lower—often much lower—the Moto G phones have not yet captured much of the global smartphone market.

A November 2018 global smartphone market share report from Counterpoint Research showed Motorola with a 3 percent global market share in Q3 2018, compared to 19 percent for Samsung, 14 percent for China’s Huawei and 12 percent for Apple. In Q3, that equated to 72.3 million phones shipped by Samsung, 52 million by Huawei, 46.9 million by Apple and 10.6 million by Motorola.