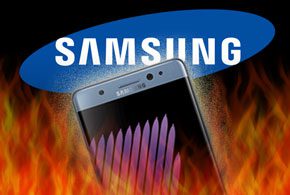 Samsung’s reputation with the public took a hit in the latest Harris poll about corporate reputations in the United States, with Samsung falling to 49th place out of 100 companies after the smartphone maker’s embarrassing recall late last year of its then-flagship Note7 smartphone line and problems with some of its consumer washing machines.

That was 42 positions lower than Samsung’s ranking in the February 2016 version of the Harris Poll Reputation Quotient (RQ) report, when the company was 7th on the list. The rankings, which have been generated annually since 1999, cover a wide range of factors about businesses, including their products and services, social responsibility, emotional appeal, vision and leadership, financial performance and workplace environment.

While Samsung’s position in the rankings fell precipitously, its overall score only dropped it from excellent to very good in the results.

That fall in the rankings, however, shows just how quickly corporate reputations can be affected by issues in the marketplace, several IT analysts told eWEEK.

“The poll results, particularly in Samsung’s case, illustrate how delicately balanced public reputation can be and how much companies have to lose,” said Charles King, principal analyst with Pund-IT. “That’s especially true in an increasingly globalized economy with 24/7/365 media coverage that often hones in on problematic issues and disasters.”

A key part of Samsung’s drop in the Harris rankings was due to the Note 7’s problems, “which obviously affected Samsung severely, so it will be interesting to see how the company fares in next year’s Harris poll,” added King.

The Note7 smartphones debuted in late August of 2016 and were quickly followed by reports about battery fires and explosions in the devices. Samsung addressed those initial reports by investigating the devices that had fires and starting its own global recall, and then in September cooperated with U.S. regulators at the Consumer Product Safety Commission when the agency issued a government recall of a million of the handsets due to at least 100 reports of fires and explosions from consumers.

In early October 2016, Samsung cut its losses and announced the end of its Note7 flagship smartphone model after new reports came in involving replacement Note7s that were supposedly free of the defects in the original models.

“Samsung has three recurring deficiencies they need to address—they lack a competent crisis management team, their service and support is so bad it is famous for it, and they operate in a culture of blame which drives cover-ups and not problem resolution,” said Enderle. “With the battery problem on their Note7 phone we saw the near perfect storm where all three elements worked against them. Instead of analyzing the problem, they tried to fast track a fix, which only made the problem worse. They had no ability to get ahead of the perception, and service just couldn’t step up because it was already inadequate for current needs.”