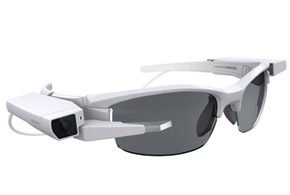 Sony has put a miniaturized computer into a small module that can attach to eyeglass frames, giving users a new way to bring smart device capabilities to eyewear-mounted systems a la Google Glass.

An early concept model of the new Sony system, which so far is being called “SmartEyeglass Attach,” is slated to be shown and demonstrated at the 2015 International Consumer Electronics Show (CES) in Las Vegas in early January, according to a Dec. 17 announcement by Sony.

Billed as a “single-lens display module,” Sony clearly aims to take on Google Glass with a twist—the Sony idea calls for a small module that can easily be attached to or removed from an eyeglass frame by users when they want to add or omit the smart capabilities of the unit. Google Glass, by comparison, includes its electronics and other components built right into the eyeglass frames that make up Glass, and they are not detachable.

The Sony module includes a high-resolution color OLED micro display that “brings out the full potential of the display’s high image quality, and a miniaturized control board with arithmetic processing capabilities on par with smartphones that was made possible by high-density packaging technology,” according to the company.

The idea, said Sony, is that users will gain a wide variety of potential uses and benefits from the device. “By simply attaching it to a pair of fashionable glasses, goggles, sunglasses, or other type of eyewear, you can instantly gain access to visual information that adds a level of convenience to your everyday life,” the company said in a statement.

There are also a myriad of other potential applications for the device, including in sports or for work, where users can gain displays of helpful information as they participate in their activities, the company said.

Information for the users will be displayed “in a small sub-window” that does not obstruct their field of vision, and the device can be attached or removed as needed so that users maintain control over when it is they take advantage of the device’s capabilities. By making it detachable, users “have the option to store it away if it does not suit the occasion,” the company stated.

Mass production of the nascent SmartEyeglass Attach devices is slated for some time in 2015, according to Sony. The company also plans to provide software development kits (SDKs) to partners to encourage and support additional uses and capabilities for the product.

Eyewear-mounted computing has been a hot development area since Google Glass first arrived in 2012. The first Google Glass units began shipping in April 2013 to developers who signed up at the June 2012 Google I/O conference to buy an early set for $1,500 for testing and development. Google also then began shipping Glass units to lucky users who were selected in the #ifihadglass contest for the opportunity to buy their own early versions of Glass. Google Glass remains in beta testing and has still not been announced for retail sales to potential customers.

Earlier in December, the tech world got what could be an early view of the next more streamlined and evolved version of Google Glass when new Google patent details and drawings were recently awarded.

The approval of the patent application came on the heels of other intriguing Glass news recently. In late November, it was reported that Glass is moving to Intel processors to replace the Texas Instruments CPUs that presently power the devices, as Google works to refine and perhaps reimagine its Glass experiment.

In addition, Glass has been getting more interest from businesses for possible adoption, in addition to interest from consumers. Lots of different businesses in a wide variety of industries have been using Glass devices in their work, including hospitals, airlines, manufacturing companies and even schools.

In April 2014, Google began a “Glass at Work” program to encourage businesses to learn more about how Glass might be integrated in useful ways for their employees and business processes. Two businesses that are already experimenting with Glass are the Washington Capitals NHL hockey club and oil field services company Schlumberger, according to an earlier eWEEK story.

The Glass at Work program is seeking developers to get involved with the effort to build more applications that can help businesses use Glass in their operations. Google built a sign-up page where developers can register to join the effort.