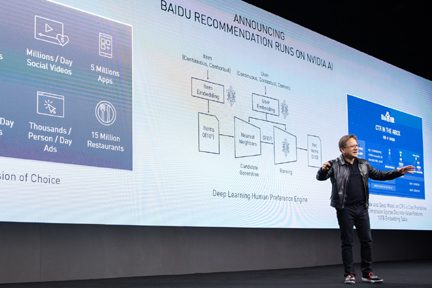 NVIDIA this week announced its Recommendation Engine, which is already in widespread use by Baidu and Alibaba, increasing click-throughs by 10x and throughput by 100x. However, the real anticipated impact is in customer loyalty, revenue improvements due to higher volume, and increased advocacy. This offering could be a game-changer for the holiday season and allow vendors with complex lines line Lenovo to better compete with vendors with simplified lines like Apple.

Let’s talk about why NVIDIA’s Recommendation Engine, which builds on its dominant AI platform, is a game-changer this week.

What To Buy, What To Request

Every year most of us run into two big problems: a) We don’t know what to buy our loved ones; and b) when they ask, we often don’t even know what to tell them we want. The result is that a lot of what we buy is either returned, stored or regifted, which wasn’t the intent at all. Also, we’ll end up getting several of the things we said we wanted, because there is little or no coordination among those who buy us gifts.

This buying decision is the one place where the massive amount of data vendors such as Amazon and social media platforms like Facebook could help us and don’t. They have the data to either know or calculate what we might want and also generally know or can calculate what our loved ones want. And given what we buy is also captured, they should be able to know enough to keep us from buying or getting redundant products.

This selection problem is an obvious opportunity for a focused AI service or product that could drill through the massive amount of data vendors and social networks to make our shopping more effective and far less stressful.

NVIDIA’s Recommendation is initially being deployed to help buyers better identify products they might want to buy. The bigger vendors, such as Baidu and Alibaba, do massive amounts of business, but if a person were to even spend five seconds on each product they carry, they’d spend decades going through their massive inventories.

What the Recommendation engine does is look at all of those products for you, take what it knows about you, and then perform a kind of a smart dating service, matching you up with the products you are most likely to want to buy. Those using it have reported significant financial benefits, and while it is too soon to measure customer satisfaction, loyalty, and advocacy, I’d expect all three scores to increase substantially. This score increase is because people don’t like to be aggravated searching for products or finding out after they were shipped a product that another product from the same vendor would have better met their needs.

But now imagine Christmas, where you put in all the people you buy for, enter your budget, and the AI, knowing something about each recipient, highlights options they don’t have and no one else is buying with an “accept all” option. This is where you could do your shopping, wrapping, and addressing with one click. For those with a lot of folks to buy for, this could take a process that now takes weeks and turn it into one that takes seconds with a much higher probability the people you gift will keep those gifts.

The offering could even take into account current and coming sales to spread your budget further than you could personally do. You get the ideal gift and save the most money, thus the conclusion that this would improve customer satisfaction and loyalty.

In the past two months, I’ve tested three Motorola phones. One that took options like larger batteries and a camera back with a huge Hasselblad lens, and one that has a built-in action camera. All of the phones, plus the free one I got for games, cost less than many pay for an iPhone. The iPhone does have an advantage in that you don’t get much choice so that choice is easier. But were Motorola to use NVIDIA’s Recommendation Engine, a buyer could be pushed to the phones that were designed uniquely to meet their needs, and they’d both save a ton of money and get a phone that better met their unique needs.

Then Motorola would only have to market the process and the more customized result rather than each camera allowing them to match Apple’s marketing spend with a more focused–and likely more successful–result.

There is a massive amount of data captured about our loved ones and us every day, and much of that data is wasted. But NVIDIA’s recommendation engine could change that and use the data to recommend the best products to both you and your loved ones. The vendors would also get back more data that would allow them to both refine this process and create better targeted new products.

But this offering had me when I realized it could fix Christmas for me and allow me to buy gifts that folks wouldn’t shelve, return or regift. This time of year, that would be a huge benefit, and I’d likely buy from the vendor that could provide this service. So, in the end, the power of NVIDIA’s recommendation engine could be in capturing customers from vendors who don’t have it.