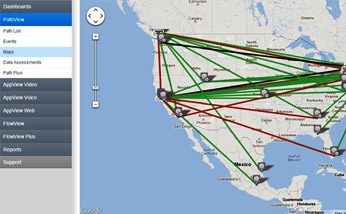 PathView Cloud (PVC) from AppNeta brings sophisticated application and network performance management to most any business via a cloud implementation. In the past, performance management required expensive on-premise hardware and software to work effectively, which was often beyond the budget of small and midsized enterprises.

PVC changes that condition by using a cloud-based platform and a yearly site fee of $1,500, which brings network performance management (NPM) into the reach of most any business where reliable network performance is a critical issue. A robust feature set, ease of deployment and ease of use are effectively combined to eliminate the hassles normally associated with NPM, making PVC a good choice for smaller enterprises that have to manage application and network performance across several sites or branch offices.

Setup proved incredibly easy, thanks to the cloud model used by PVC, which eliminates the need for any complex on-premise proprietary hardware. Instead, a simple plug-and-play device, the PathView m20 microAppliance is used at each site and requires little more than an Ethernet connection to the monitored network and a power source.

The m20 microAppliance can generate performance events/traffic for as many as 50 WAN targets, 200 LAN targets and 25 concurrent voice over IP (VOIP) calls. The device connects via an Ethernet cable and supports speeds up to 1G bps and offers support for 802.1Q Virtual LAN and Virtual IP.

All those capabilities are wrapped together using a cloud-based GUI, which runs in all the popular browsers and offers tabbed and menu-based views of reports, monitoring activities, executed tests and so on.

The primary GUI interface takes the form of a dashboard, which is user-definable and is set up to give network and application performance statistics at a glance. The dashboard can be configured in a number of different ways. However, I preferred setting it up to display service-level compliance, the status of monitored paths and a graph that displayed violations.

Violations are basically when performance falls out of an acceptable range. That graph also gave further insight into the type of violation because I was able to determine if the violation was due to data loss, saturation, changes to quality of service (QOS), latency problems and so on—all at just a quick glance.

Monitoring and Testing Performance Are Key

The real meat and potatoes of PVC come down to monitoring and testing performance. Here, I found several additional dashboards and screens that gave further insight into network performance. For example, the PathView tab offers GUIs for a Path List, Events, Maps and Data Assessments. Each of those screens offers an abundant amount of information.

The monitored paths dashboard highlights each defined path and offers a summary of violations, what route was taken, as well as the origination and target. Furthermore, you can drill down further to see what the actual event was and gauge the total capacity of the connection and how much of that capacity was used by the monitored event.

In fact “Events” is another tab on the management console underneath the PathView dashboard. That GUI sorts the types of events, such as “Test,” “QOS” or “Data loss “and gives detailed information on that specific event. For example, a “Service Quality” event may offer information such as “Measured Utilized Capacity (7.67M bps) clears condition Utilized Capacity > 10 Mbps,” which gives a concise description of what exactly is happening.

Of course, the above are only minute examples of the information that can be delivered by the platform. Other notable capabilities include the ability to monitor physical networks and translate that information into graphical dashboards based on geographic maps. In other words, I was able to look at a world map (powered by Google maps) that showed the active WAN links between locations and how those links were performing. I was able to quickly drill down to locations from the map view and further delve into the performance issues at those locations.

Other primary features offered include video, voice and Web performance assessments. Here, I was able to access GUIs that offer graphical representations of each of those elements. For example, the Video Tests menu shows call loads, bit rates used, length of calls and so on. The same information is offered for voice (VOIP) and Web traffic under their respective tabs.

PVC also offers extensive reporting capabilities and includes the ability to customize reports. Also included are some 30 canned reports, which offer everything from capacity comparisons to jitter instances to packet loss. All the reports can be used to validate connection quality, as well as throughput, making it easy to judge if a business is getting the amount of bandwidth they are paying for.