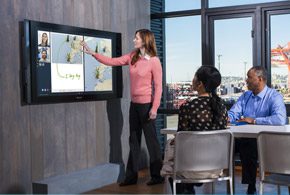 First unveiled nearly a year ago, Surface Hub is an 84-inch, Windows 10-powered all-in-one system that incorporates Office, OneNote and Skype for Business for interactive meetings and video conferencing. Competing against enterprise conferencing and collaboration offerings from Cisco, Citrix and Polycom, the device packs a 4K touch- and stylus-capable display, along with built-in motion sensors, cameras and near-field communications (NFC). Microsoft is also selling a smaller, 55-inch HD version.

Originally set to ship in September 2015, Microsoft pushed back the Surface Hub’s release to early 2016. Signaling the device will soon start hanging on the conference room walls of some enterprise customers, the company announced yesterday that it had added support for Surface Hub to OMS.

“Through this solution, you can gain insights into Surface Hub availability, wired and wireless projections, and the Surface Hub’s own calendar,” said Microsoft Program Manager Laura Cruz in a Jan. 19 announcement. “With availability data your IT team can determine if a Surface Hub is not available without the need to physically stop by each device.”

Using charts and graphs, the OMS dashboard can be used to monitor Surface Hub’s usage and how successfully it handles projected content. “The calendar data shows whether the calendar for the Surface Hub has been initialized and is available,” informed Cruz. “Through the wireless and wired projection views you can determine if a particular Hub is not able to project correctly. And of course, all of this data is searchable and can be used on top of alerting and other OMS capabilities.”

Once a customer unpacks and sets up a Surface Hub, it will seamlessly connect to existing OMS environments, she assured. “Surface Hubs are shipping with the agent software needed to connect to OMS, so there is very little setup work needed. All you need to do is configure the Surface Hubs to connect to your OMS workspace, which you can do manually or programmatically.” OMS will begin displaying relevant data within 24 hours of having detected the new hardware.

Meanwhile, early preorder customers can expect to receive their units sometime in the first quarter of 2016, said a Microsoft spokesperson in a statement to eWEEK.

“We are excited about the impact this new category of device will have on transforming how people collaborate at work. It’s an ambitious goal and we want to make sure we are taking the right steps to build a successful business that will drive this new category forward,” added the spokesperson. “We are doubling our investment in partner readiness to deliver a premium customer experience.”