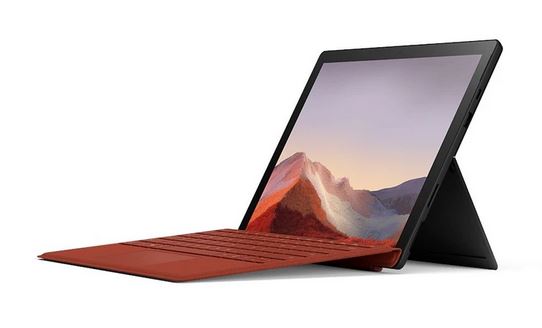 Virtually every laptop currently in the market was designed before the pandemic. I get to see many laptops long before they are released, and, to date, I have yet to see a laptop specifically designed for how we work now. Think about it: Before the pandemic, portability was essential, long battery life was critical and the ability to work on an airplane also a critical consideration. Most of us aren’t flying very often; we are almost always near power, and doing Zoom meetings with an external camera is a best practice.

Our portability needs have moved from getting on planes to moving from room to room to watch the kids or the pets. If we are wise, we have a large monitor and separate keyboard and mouse. So, if we were to develop a laptop for this new normal, what would be different?

I received the new Surface Pro 7 a few days ago and, while I’ve never been a massive fan of tablet-forward designs, it may be the best configuration for our post-pandemic world. Let me explain.

But when I came to that conclusion years before the pandemic, I now find that tablets are handier than pre-pandemic.

The current model has many of us working and overseeing our homes at the same time. We aren’t going into work; well, many of us aren’t; we are working from a home office, kitchen, bedroom, patio, living room, or even garage. We aren’t going to meetings, but with tools like Microsoft Teams, the meetings are coming to us, and we have to participate in them while doing all that other stuff.

Many of us do have home offices where we have monitors, keyboards, mice, etc.  But when we have to oversee our pets, we need to grab our computer and go and often don’t have room for any peripherals but still have to stay connected and functional.

Suddenly, a tablet makes sense because it allows for the flexibility of working anywhere, even standing up (I have yet to figure out how to work with a clamshell laptop standing up reliably). Laptops often have trouble dissipating heat when they are closed. That is why Crypto miners are flipping them over, opening up the keyboard, and using them in a tented configuration, which not only isn’t very attractive, it takes up a lot of space. With the Surface, you can use it as a kickstand, take off the keyboard, and use it as a desktop computer while in your office. And, if you have the room, the Surface Pro display can be used as an extra monitor without dealing with the space a laptop keyboard would take up.

When you have to watch the pets or kid, you can grab it, either attach the magnetic keyboard or leave it off, and whether you are standing, sitting or lying down, you have a functional PC solution.  If you want to watch a video, it works like a little portable TV without the keyboard. It has Dolby Audio Premium, though; I’d use headphones most of the time to keep from annoying my wife. You can also use the kickstand to put it in portrait mode, which lines up better if you want to use it as an extra display but, were it me, I’d redesign the kickstand, so it sat more securely on the desk. A little bit of an angle on the edges would significantly stabilize it, but it does work. Don’t bump the table, because it will fall over in that mode.

If WAN was necessary, I might favor the Surface Pro X instead (though I’d likely wait for the 5G version at this point). Still, most of us have Wi-Fi at home and would probably appreciate an Intel processor’s extra performance, and the Surface Pro 7 supports Wi-Fi 6 (the Surface Pro X is both Wi-Fi 5 and LTE).

Oh, and one other thing. If you’ve ever had a laptop that is plugged in and then tripped over the cord, only to see the laptop hit the cement or tile floor and break, you were likely a fan of Apple’s magnetic connection. Well, Apple got rid of it, but Microsoft picked it up, and with pets, kids and spouses moving around you, that alone could be a critical feature when working from home.

The tablet-forward design works uniquely well during the Pandemic. It more easily shifts to how many of us work today, either with a monitor and keyboard or mobile, keeping the pets and kids from killing each other or destroying the house. As a result, while it wasn’t designed for the Pandemic, it may be the closest to an optimized solution and a good starting point for that future design.

For me, I’ve never liked tablet-forward designs up until now, but suddenly this design has a purpose, and that purpose is keeping me sane during my pandemic-imposed isolation. So, until a purpose-designed product comes out, the Microsoft Surface Pro 7 may be the best laptop choice during our new normal.