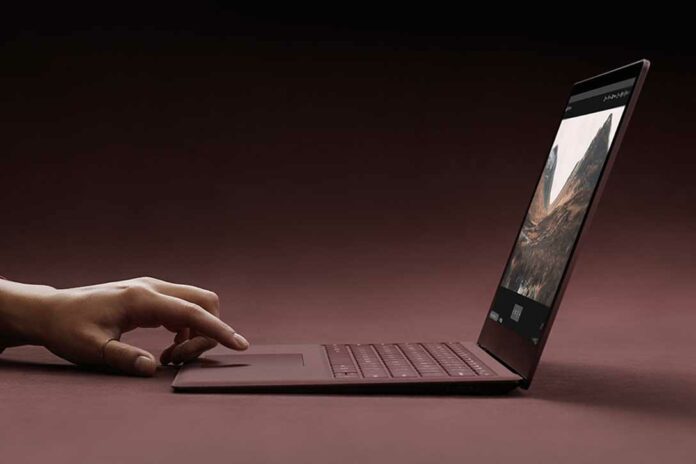 Aimed at students, the sleek portable runs the newly introduced Windows 10 S operating system and features a 13.5-inch PixelSense display in the now-familiar 3:2 aspect ratio that has become a distinguishing characteristic of the Surface portfolio. The touch- and stylus-enabled screen has a resolution of 2,256 pixels and 1,504 pixels, for nearly 3.4 million pixels in total, and is “the thinnest LCD touch module ever created,” claimed Panos Panay, corporate vice president of Microsoft Devices during an education-themed media event in New York City today.

Surface Laptop weighs 2.76 pounds and when closed, it measures a trim 14.47 millimeters at the device’s thickest point. Tucked inside is a seventh-generation (“Kaby Lake”) Intel Core i5 or i7 processor. Depending on the configuration, the device accommodates up to 16GB of RAM and 512GB of integrated PCIe-based solid state drive (SSD) storage.

Notably, the device’s battery can last up to 14.5 hours between charging. “Leave your charger home,” Panos urged students who may soon be toting a Surface Laptop to class, assuring them it will have enough of a charge to last them through the school day and beyond. Historically, device makers had to sacrifice on some aspect of laptop functionality to optimize battery life, argued Panos. “This is the laptop that starts to reset the category,” he added.

Surface Laptop’s battery-sipping attributes also extend to the device’s sleep mode. Microsoft asserts that students can close their laptops and head off to spring break, and when they return they can pick up where they left off with battery life to spare.

When it ships on June 15 in the U.S., the Surface Laptop will be available in four colors on models outfitted with an i5-7200U processor, 8GB of RAM and 256 GB of storage. Color choices include standard Platinum, Graphite Gold, Cobalt Blue and Burgundy.

Outwardly, other distinguishing features include hidden mechanical hinges and practically seamless transitions in materials. Apart from the scratch-resistant Gorilla Glass 3 on the screen, those other materials include the aluminum, used in the device’s casing and the Alcantara synthetic fabric used as a covering.

It’s not the first time that Microsoft has used Alcantara in its hardware. A year ago, the company used the synthetic fabric from Italy in a Type Cover for the Surface Pro 4. Now, the material appears on the keyboard portion of the Surface Laptop. As a bonus, Alcantara is spill-resistant, making it easy to clean when mishaps occur. The fabric also camouflages the laptop’s speakers, eliminating the need for speaker grills.

Surface Laptop will ship with Microsoft’s small footprint Windows 10 S operating system, which limits a user’s software choices to apps in the Windows Store. There’s a way to get more Windows software on the device, but Panos doesn’t recommend it.

“If you need to use an app that isn’t in the Windows Store, in just a few clicks can go to the Windows Store and switch to Windows 10 Pro. But you shouldn’t,” cautioned Panos in a May 2 blog post. “This device, this OS, they’re made for each other, and together they offer so much.”

Surface Laptop is available for preorder now with an estimated ship date of June 15. Prices start at $999 for an Intel Core i5 model with 4GB of system memory and 128GB of SSD storage.