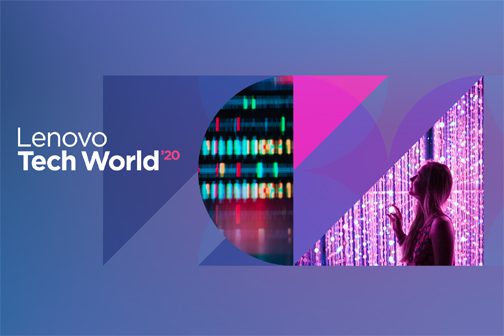 Lenovo held its Tech World event last week, and like its peers, the company conducted the event virtually.  Of the other industry events so far, Lenovo has been the strongest in demonstrating diversity in its staffing and connecting new product offerings to specific customer use-case examples. Each speaker focused on addressing the need to address the unique needs that have surfaced during the pandemic and the critical need to support individuals, particularly the most at risk, during this pandemic event.

They covered an impressive amount of ground in a short time, but three things stood out for me. First was that the scope of offerings was pretty much unmatched; second, Lenovo is the first vendor in its class to release an advanced mobile intelligent robot; and third, it took the lucrative DreamWorks relationship away from HPE.

Let’s talk about each one of these.

Lenovo doesn’t have the most individual products in every area it covers, but it covers more areas than anyone else. It is the only IT hardware vendor that goes from smartphones to high-performance servers, and it is the only vendor in its class with digital assistants for both consumers and business customers.

This broad spectrum allows Lenovo to provide comprehensive client, server and cloud-connected solutions that other competitors can’t handle without partners. The company’s tendency to present its products showcased by an actual customer deployment defined and demonstrated the unique solutions. With foldable screen products in both the PC and smartphone space, Lenovo also demonstrated innovation. As with other presentations, these advantages were framed with the new needs that have emerged during the pandemic event.

Lenovo made it very hard not to conclude that it is unmatched in breadth and capability during this pandemic event, showcasing impressive focus during their summit.

I’ve been arguing for some time that the computer vendors needed to embrace robotics as the next big wave. HP has its 3D printers, which are arguably robots, but the market doesn’t see them as such. What Lenovo demonstrated was an AI-driven mobile robot designed to paint. This same core technology could be used for various other tasks, but Lenovo decided to start with painting. I think this is because industrial painting is either done with robots that are very hard to train and repurpose or with people, who provide more flexibility but relatively inconsistent quality.

Lenovo’s painting robot blends the advantages of both approaches. A remote operator trains it on how to paint the first part. It can then operate independently, then automatically adjust its programming to address part anomalies and improve quality over time. It can also share what it learned with other robots, allowing the entire robotic family to advance at nearly the same pace.

While, as noted, this initial robot–which combines AI, vision and an articulated mobile robot arm–creates a viable replacement for a human operating in what is a hostile environment (painting requires substantial protective gear to be done safely), the same core technology could be applied to a variety of jobs currently done inefficiently by humans.

DreamWorks was one of the most significant references for the old HP, and after the firm was broken up five years ago, DreamWorks shifted to Lenovo for its server needs. This outcome is fascinating because Jeffrey Katzenberg, who used to run DreamWorks, and Meg Whitman ran off together to form Quibi, which just failed spectacularly a few weeks ago.

HP and DreamWorks brands were interwoven during the years when HP was one company, and Lenovo taking that relationship on the HPE side likely threw up all kinds of red flags surrounding HPE. Relationships at this level tend to be personally managed by the CEO, and the related customer gets a level of support that is unmatched as a result.

This customer relationship not only showcases a massive advancement in capability by Lenovo but an even more significant loss by HPE and, used properly, could become an unmatched advantage as Lenovo moves to displace HPE in large Enterprise accounts.

Lenovo is one of the few genuinely global vendors with a balanced presence in the U.S. and China. This unique structure naturally makes them geographically diverse while forcing a certain level of staffing diversity. This diversity was showcased in their event and fueled their comments about caring for the most vulnerable of us during the Pandemic.

But my key takeaways were on the company’s extreme breadth both in terms of product and geographic reach, because this showcases a unique capability to deal with multinational and remote employees to support in-depth needs. I believe robotics is the next big technology wave, and this view has been widely shared at events held by Lenovo competitors who aren’t in robotics.

Lenovo showcased a robot that initially is focused on painting but could be adapted to various uses, including helping around the home relatively quickly. This robot can be trained in the field and share that training with its peers for rapid skill proliferation. I think it is a game-changer for the industry.

Finally, taking the DreamWorks relationship from HPE is enormous. You never see a reference account so tightly bound to a brand separated from it.

In the end, Lenovo did what it had to do: showcase itself. This means showcasing unique capability, caring and empathy, diversity and inclusion; it also showcased that it is a force to be reckoned with and uniquely capable in what remains a very competitive market.