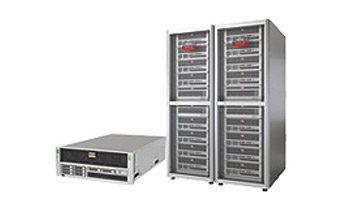 Oracle and Fujitsu are rolling out a set of high-end Unix servers that officials said will be highly scalable and offer mainframe-like performance.

The two companies, which expanded their SPARC-development relationship two years ago, announced the availability of Fujitsu’s M10 servers, which are based on that company’s 16-core SPARC64 X processors. The servers can scale from one to 64 processors, according to Oracle and Fujitsu officials.

The systems come less than a month after Oracle unveiled new midrange and high-end systems running Oracle’s newest chips, the SPARC T5 and M5 processors. The introduction of Fujitsu’s M10 servers April 10 will give businesses running the Solaris operating system an even wider range of new systems to choose from.

“Fujitsu M10 delivers extreme performance that enables customers to further improve their competitiveness with real-time decisions in the ever-changing world,” Noriyuki Toyoki, corporate senior vice president at Fujitsu, said in a statement. “Fujitsu M10 is our commitment to bring big results to customers in the big data era, helping customers maximize their ROI with unique dynamic scalability and mainframe-class reliability.”

The new M10 systems come in three models. The M10-1 is an entry-level system that is powered by a 2.8GHz, 16-core processor and offers 512GB of memory and 4.8TB of disk storage. The 1U (1.75-inch) systems offer the same performance as a larger midrange server, saving businesses power, space and money, according to Fujitsu officials.

The midrange M10-4 is powered by four 16-core SPARC64 X chips and offers up to 2TB of memory and 4.8TB of disk storage. The 4U (seven-inch) system also saves businesses space and money by giving them high-end server capabilities in a midsize system. The M10-4 offers four times the performance of its predecessor.

The high-end M10-4S can scale up to 64 processors—1,024 cores—32TB of memory and 76.8TB of internal disk storage. The modular design offers businesses a pay-as-you-grow option and up to 232GB per second of bandwidth data transfer rate between boxes, according to Fujitsu. The system can run up to 2,048 virtual machines.

Fujitsu and Sun Microsystems had a strong working relationship, and Oracle officials continued that after buying Sun for $7.68 billion in 2010. Oracle and Fujitsu expanded that relationship a year later, saying that not only could the two companies collaborate on developing technology, but that both could jointly sell Fujitsu’s SPARC enterprise systems and that Fujitsu can resell and distribute Oracle products.

During a press conference in March to announce the new Oracle SPARC T5 and M5 systems, CEO Larry Ellison boasted about the performance of the new SPARC chips.

“When Oracle bought Sun, a lot of people said, ‘Gee, the SPARC [processor] was a laggard. It will never catch up,'” Ellison said. “We did catch up, and we passed [competitors].”