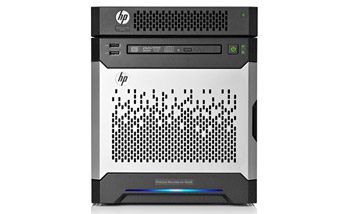 Hewlett-Packard is rolling out new and enhanced servers aimed at smaller businesses, including the latest model in its line of ProLiant MicroServers.

HP officials unveiled the new systems June 11, saying they are simpler to deploy and manage as well as easier to afford, which is important to small businesses that don’t have the IT budget or staff of their larger counterparts.

The announcement comes as HP gets its annual Discover conference under way in Las Vegas, and a day after company officials unveiled a number of new enterprise PCs.

The new servers aim to give SMBs—such as retail stores and medical practices—tools to scale their computing capabilities while enabling greater content sharing and collaboration among employees. Noting numbers from AMI, HP officials said that within the next five years, 5.1 million small businesses around the globe will buy their first server. They’re going to look for systems that meet their particular needs, according to Mark Potter, senior vice president and general manager of servers for HP.

“Small and midsized businesses require innovative server solutions that meet their specific business needs and price points to remain competitive,” Potter said in a statement. “These new HP ProLiant servers are easy to use, highly reliable and cost-effective to maintain, enabling our SMB customers to boost business performance, save time and cut costs.”

HP launched its first ProLiant MicroServer in 2010, with the idea of giving SMBs a very compact, simple system that could handle their immediate computing needs, scale when needed and fit within their limited budgets. The new MicroServer Generation 8 is still designed to be a solid first server, and is small and quiet enough to be put onto the floor or a desk in an office space. It’s aimed at businesses with fewer than 10 employees, according to HP.

The system makes it easy to store, secure and share information from a central location, enhancing collaboration and content sharing among employees. With Microsoft’s Windows Server 2012 Essentials offerings, the data and applications on the server can be accessed remotely from almost any Internet-connected device.

The MicroServer Gen8 also takes advantage of HP’s ProLiant Gen8 server features and its ProActive Insight architecture, which helps simplify installation and maintenance via HP’s Integrated Lights-Out (iLO) Management Engine and Intelligent Provision capabilities, which are embedded in each server.

Through iLO Essentials, businesses can remotely manage the server, while HP ActiveHealth lets them continuously monitor the system’s performance. According to HP, ActiveHealth not only monitors the health of the server but also the power consumption. HP Smart Update lets users make application updates faster.

HP also gives users the option of integrating the company’s stackable PS1810-8G managed networking switch, giving SMBs a converged infrastructure offering that automatically discovers, monitors and speeds up the connectivity performance of both the compute and networking components. The server is powered by an Intel Celeron or Pentium processor and offers up to 16GB of memory. The PS1210-8G switch, through support for bonding or link aggregation of two Ethernet interfaces, doubles the data speeds of the previous generation of MicroServers.

The MicroServer Gen8 is available now starting at $449.

In addition, HP also is expanding its ProLiant server portfolio for SMBs, channel partners and emerging markets to include systems with improved performance, power management and serviceability. The ProLiant ML310e Gen8 v2 is an enhanced, single-socket tower server that offers enterprise-class manageability for smaller businesses that have remote or branch offices. The DL320e Gen8 v2 is a new single-socket, rack-optimized system that can be used for single-application purposes in such areas as chain stores, medical offices, transportation and the military, according to company officials.