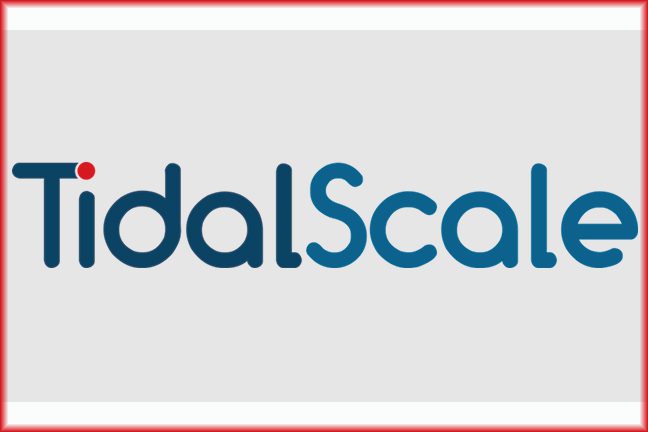 SANTA CLARA, Calif.—A little-known startup called TidalScale may well have come up with the biggest advance in servers since VMware’s virtualization of the Intel IA-32 platform 18 years ago.

That is, of course, if it all works as the company says it does. And since they already have several units in daily production whose owners say it does work—and works very well—then perhaps there is truth in the story.

TidalScale, which introduced itself and its new server March 8 at the Open Compute Project Summit at the Santa Clara Convention Center, is doing something it calls “inverse virtualization.” Instead of taking a standard server and slicing it up into smaller pieces for individual applications, TidalScale aggregates computing power from various commodity-type boxes from within a system and corrals it all into a single computing ocean of DRAM (dynamic random-access memory) computing power.

This is parallel to aggregating various storage silos into one huge data repository.

“We’ve developed a software-defined server. We look at it as the missing piece in the software-defined data center,” Michael Berman, vice-president of engineering at TidalScale, told eWEEK. “You can define your networking, you can use any hypervisor (KVM, VMware) for slicing a single server up if you want. But we do the inverse; we’ve developed what we call a hyperkernel, which is technically a distributed hypervisor.

“The technology is all the same underneath, but what we do is stitch together multiple SKUs (stock-keeping units) of hardware. They could be 1U, 2U—it doesn’t matter to us. We stitch those all together into one very large virtual machine.”

It’s a cluster that looks like one big computer, Berman said. “You just use whatever software you have, and we eliminate any core and/or memory constraints,” Berman said.

TidalScale is an “everything” lake, CEO Gary Smerdon told eWEEK.

“We bind together the I/O, the compute, the memory and the storage. The user gets to decide how big a system it’s going to be. And the system gets to adapt to what the application’s need is,” Smerdon said.

“This is absolutely true in the world of storage, and in the world of networking, but a computer—what’s a computer? It’s your phone, a server, a watch, it’s many things. Our team has basically broken the barrier on what a computer is. A computer now is a collection of compute, memory, I/O, and storage resources that is configured together to create whatever size system you want it to be.”

Smerdon showed eWEEK an animated slide illustrating the movement of a node to a different physical location, in order to obtain optimal performance in a particular workload. That’s something you don’t see every day.

Campbell, Calif.-based TidalScale—founded by Ike Nassi, chief engineer for SAP’s crown jewel, the HANA database—is a 4-year-old, post-Series A startup that is well into production and selling servers, mainly through industry contacts and word of mouth, until now.

The new startup on March 8 also announced a partnership to provide hosted software-defined servers on the OrionVM Wholesale Cloud Platform. OrionVM is a wholesale Infrastructure-as-a-Service (IaaS) provider that has developed a hyperconverged tech suite (virtual storage, compute, orchestration and virtual networking) to enable the delivery of high-performing and highly reliable cloud solutions.

Can Run Capacities from 1.3TB to 13TB in Size

This partnership will give enterprises struggling with big data, analytics and memory-intensive computing challenges on-demand access to a suite of TidalScale servers ranging in capacity from 1.3TB to 13TB of DRAM and up to hundreds of cores, the company said. The large-scale software-defined servers are assembled from standard physical server hardware running on OrionVM.

These instances are far larger than any available from ordinary cloud vendors, yet they are available at lower cost per gigabyte of memory, the company said.

“Making the TidalScale service available via OrionVM’s innovative cloud technology will significantly reduce friction and complexity for a wide range of clients by eliminating the need to purchase their own hardware and manage a data center,” Smerdon said. “This is by far the most cost-competitive solution available for running memory- or core-intensive applications natively on systems that well outclass ordinary servers.”

The business model, Smerdon said, is also adaptable. Customers can buy the software service by amount of memory, number of cores, or number of nodes.

To learn more about TidalScale, go here to schedule a free demo.