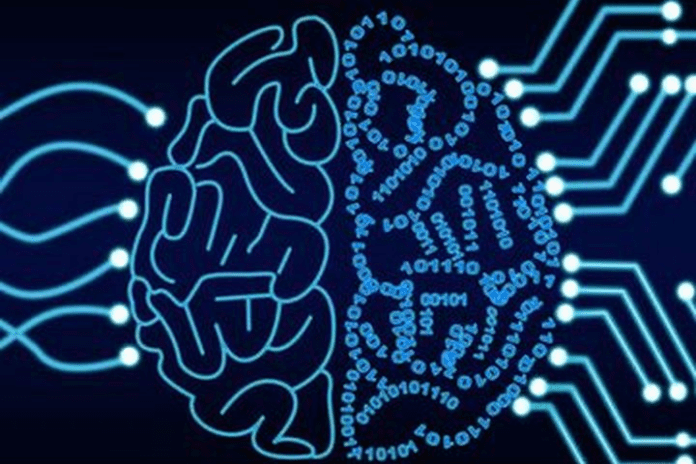 To understand AIOps, it helps to consider one very weird thought: the technological systems that we humans have built have become too complex to be managed by mere humans.

Specifically, the IT operations that run businesses have galloped forward in complexity, leaving their human masters in semi-bewilderment.

It’s a great irony of human intelligence: we’ve built IT systems that are so advanced that they are, in essence, overwhelming us.

(That does raise troubling questions about the human race, but that’s a discussion for another day.)

Things didn’t use to be this snarled. In the pre-cloud era of yore, monitoring our data centers was comparatively simple. A few key data feeds offered a portrait of how the machines were running (or not running). A team of IT pros was left alone to manage it, and few really knew what they were doing, or cared.

But then came cloud computing, which spawned private cloud, public cloud, hybrid cloud and multicloud – all of which is transitioning to cloud native. Your containers hum along with your VMs (or maybe your VMs run inside your containers, it depends).

You might use OpenShift, which is a platform-as-a-service hybrid cloud platform that enables microservices. This might interoperate with your Tanzu deployment, which is a container management system on a virtualization platform. Got that?  (But wait – does the API from AWS work with your data warehouse on Azure?)

Meanwhile, the leisurely pace of data analytics is being superseded by real time streaming data, which is far too fast for humans, and so requires algorithms to analyze. Then there’s the torrent of data from edge computing, the blinking universe of IoT devices, and a boundless ocean of smartphones (around 3.5 billion now, forecast for 4.3 billion by 2023).

Add all it together, and enterprise IT systems – under ceaseless attack by hackers, not to mention budget constraints – can only utter one word: help!

The good news about human creativity: okay, we invented IT systems that have overwhelmed us. But recently we’ve been smart enough to create a secondary system to help manage the original IT system.

(But wait – shouldn’t we have simplified the original system? Naw, that’s not the way we humans do things. Again, this raises troubling questions.)

The secondary helper system is called AIOps. A portmanteau of artificial intelligence and IT operations, the term AIOps was originally minted by Gartner in 2017.

You might think that AIOps is short for “AI Operations.” But strangely, no. Gartner decided that AIOps stands for “AI for IT Operations,” even though there’s no reference to IT in the term itself. (More on that in a moment.)

At any rate, if Gartner hadn’t coined the term, the IT market itself surely would have developed it. The technology is sorely needed.

In short, AIOps helps handle the exponentially growing flood of data that’s overwhelming today’s IT operations systems – and the beleaguered humans attempting to manage them.

“The best that individual humans in IT Ops can do is sample data points,” explains Andi Mann, founder of Sageable, and formerly Chief Technology Advocate at Splunk. The problem: humans likely miss important information, or merely aggregate summaries for post-facto review. At worst, the system complexity could mean “running the risk of finding problems too late to prevent disaster.”

In contrast, “machines do not have these limitations,” Mann notes. “By applying AIOps principles and technologies – like event correlation, algorithmic processing, machine learning, and predictive analytics – machines can read every byte from every data source. In real time, direct from the stream, without sampling or aggregating.”

AIOps harnesses artificial intelligence to power a much needed digital transformation. At its best, AIOps helps morph a human, manual workflow into a frictionless, human-digital happy marriage. Or at least that’s the hope.

For IT systems to fully cope requires not just flagging current problems, but peering ahead and predicting future snafus – a core goal of the nascent AIOps technology.

Based on a study commissioned by BMC, the top five uses cases among companies using AIOps strategy are: 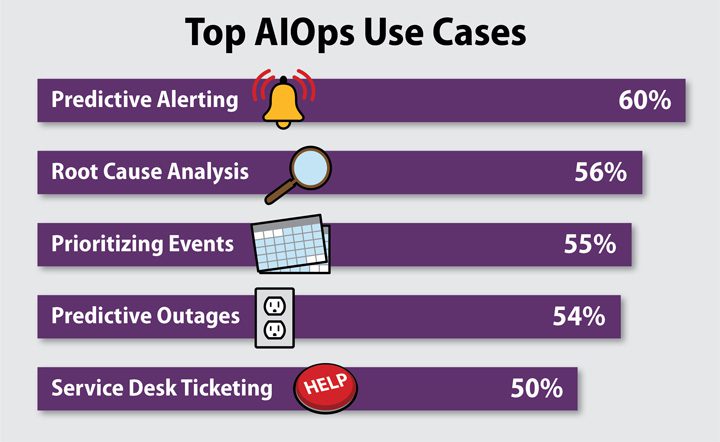 In other words, AIOps provides a second pair of eyes whose AI-based pattern tracking can help forecast the future.

AIOps “can ensure that potential problems are proactively flagged before they become actual problems that impact end users, by filtering and correlating data ingested across the IT environment, including third-party solutions,” Siddiqui says.

Even in its short life, AIOps has attracted plenty of deep-pocketed customers. Vendors like Splunk, BMC, New Relic, IBM, Big Panda and others are competing aggressively – with good reason: The AIOps market, hovering around $15 billion in 2021, is expected to hit $40 billion by 2026.

The Future of AIOps

Because AIOps is still early in its adoption, expect major changes ahead. Among the two key changes to expect in the AIOps, one is quite obvious and expected; the other represents a fundamental shift to how the technology is understood.

First, the obvious one. Under the hood, there’s a blurred line in AIOps between what’s simple automation and what’s actually artificial intelligence. Many IT processes can be automated. System upgrades, for instance, can be automated on a pre-set schedule instead of completed manually using a spreadsheet.

However, this automation isn’t true artificial intelligence. It’s merely the software equivalent of a robot on a factory floor, cranking a lever every 15 seconds. In contrast, an AI-based system adapts and responds on its own – that’s the magic of artificial intelligence. Once humans program the algorithms, an AI system’s self-learning offers a quantum leap past simple automation.

So expect AIOps to leverage more and more AI going forward, exponentially expanding the support it offers to IT systems. Having a well-tuned AIOps system will offer an enormous competitive advantage. Companies that don’t deploy AIOps likely won’t be able to compete long term.

Future 2: The Meaning AIOps Will Change

The term “AIOps” will go out of fashion, of course. All IT operations will necessarily have artificial intelligence built in – or they won’t survive. So the “AI” before “Ops” will become redundant. We refer to some cars today as “electric cars,” yet when all cars are electric we’ll drop the “electric.”

But the change in AIOps will be far greater than terminology. When Gartner coined the term, the research firm decided – in its infinite wisdom – that it stood for “AI for IT operations.” Notice the oddity: It suggests that a company will have a stand alone AI system dedicated to running its IT operations.

Over time, that notion will seem quaint. Given how integral a company’s IT systems are to its overall operation – from HR to sales to procurement – there’s little chance that any AI support system will be walled off in IT operations.

The term AIOps will, finally, stand for what it always should have stood for: Not “AI for IT Operations,” but “AI Operations.” A single all-encompassing AI system will help monitor IT operations, forecast business spending, predict employee retention rates, and analyze the success of marketing campaigns. It will probably manage brewing the morning coffee, with stronger caffeine levels for certain work days (Mondays?)

It’s this vision of AI that I discussed with Yogesh Gupta, CEO of Progress Software, in a recent interview. “To me, AIOps is a broader term,” Gupta says, noting that AI operations is not merely about IT operations but about “how do you bring AI into all aspects of your business?” This includes core business apps to security to methods used by your data scientists, he notes.

The emergence of this broader definition means that, long term, companies using AIOps need to select an AIOps system that will scale at multiple levels. That can move far beyond data about network and server performance to boost an array of business practices. Even now in 2021, there’s talk of the convergence of AIOps and RPA, or robotics process automation. So a single system will handle your repetitive office tasks and oversee the health of your virtual machines.

Given how deeply AIOps vendors are investing in advancing their toolsets, certainly more changes like this are coming. How long until AIOps is seen as the system to support virtually all business and tech tasks?