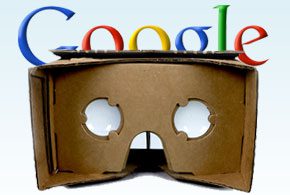 If the idea of trying out one of the build-it-yourself, supercool Google Cardboard virtual reality devices that were recently unveiled by Google has caught your imagination, you’re in luck. At least two companies have created inexpensive kits that include all the simple parts needed to build your own Google Cardboard unit in a few easy steps.

Cardboard is a handheld virtual reality viewer that can be easily built to mate with a user’s smartphone so the user can view various Google services such as Google Earth, YouTube and more for amazing VR experiences. A Cardboard user can build the device using basic plans provided by Google and then download an Android app that is used with the viewer. The viewer is made by cutting and folding cardboard until it is shaped into a boxy-looking VR attachment. Several other parts are also needed, including some Velcro, a rubber band, two small magnets and some aftermarket lenses, which can be purchased online.

Now, though, several quick-thinking vendors have put together simple parts kits or assembled units to let Android users try out Google’s innovative virtual reality devices without having to collect the needed parts on their own.

One vendor, UnofficialCardboard.com, sells partially and fully assembled kits for $29.99, including shipping in the United States, according to Dave Vinzant, the owner of the company. International buyers must pay an extra $10 for shipping. The kits include special corrugated cardboard that is laser-cut to Google’s specifications.

Even Google has ordered one of his kits to sample it, Vinzant told eWEEK in a telephone interview. So far, the packaged kits are being shipped 24 to 48 hours after orders are being received, he said.

Vinzant said he got the idea of packing the parts for Cardboard and offering them for sale shortly after Google unveiled the project and the app at the Google I/O 2014 developer conference in June. “As soon as I see something, it clicks in my brain and I have to build it and make it work,” he said. “Then Google came out with this Google cardboard thing, and here we are.”

The most difficult parts to source for the kits were the lenses and the special cardboard, said Vinzant.

Vinzant said his company is working to expand the reach of Cardboard to other devices, including 5.5-inch and 7-inch models for larger phones and tablets.

Another vendor, DODOcase, is also offering a prepackaged kit to build a Cardboard device for $24.99, according to the company’s Website. The kits, which take less than 5 minutes to assemble, are shipping in four to six weeks, according to the vendor. Standard shipping is $2. A spokesperson for DODOcase could not immediately be reached by eWEEK on July 8.