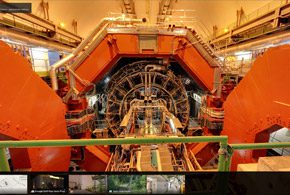 Back in 2011, Google’s Street View cameras went deep inside the huge, amazing physics laboratories and research areas at CERN, the European Organization for Nuclear Research, in Geneva, Switzerland, capturing spectacular photographic images of the massive facility.

“At CERN, the European particle physics laboratory based in the suburbs of Geneva, some of the world’s best physicists and engineers are using advanced particle accelerators to help solve age-old questions about the universe,” including how the universe began and what it is made of, wrote Milite.

“We’re delighted that CERN opened its doors to Google Maps Street View allowing anyone, anywhere in the world to take a peek into its laboratories, control centers and its myriad underground tunnels housing cutting-edge experiments. Street View also lets scientists working on the experiments, who may be on the other side of the world, explore the equipment they’re using,” he continued.

Included in the online photo tour are images of the 16.7-mile-long Large Hadron Collider, which is the world’s largest and most powerful particle accelerator used for scientific research, according to CERN. The collider began operating in 2008.

Also included are images of the 7,000-ton ATLAS detector, which operates from a cavern 100 meters below a small Swiss village to probe for fundamental particles, including the Higgs Boson, wrote Milite.

Photos are also presented of ALICE, a heavy-ion detector on the Large Hadron Collider ring that’s “designed to study the physics of strongly interacting matter at extreme energy densities, where a phase of matter called quark-gluon plasma forms,” wrote Milite.

Another general-purpose detector, called the Compact Muon Solenoid (CMS), is also documented, according to Milite. The CMS is designed to investigate a wide range of physics, including the search for the Higgs boson, extra dimensions and particles that could make up dark matter, he wrote.

Images of all of the CERN facilities can be perused in the detailed Google Views site.

The CERN images were collected over two weeks back in 2011 by members of Google’s Street View team from Google’s Zurich offices.

Interestingly, another Google team, this time from the Google Glass initiative, visited CERN this past April, accompanied by a Michigan-based high school teacher, Andrew Vanden Heuvel, who used Glass to present his own virtual tour of the CERN facilities for a group of students watching live in the United States. Vanden Heuvel was sent to CERN by Google Glass so he could use Glass to present the live physics lesson.

The Google film crew went along, capturing Vanden Heuvel’s exploration of the collider, which included riding a special bicycle inside the 16.7-mile-long collider track. Upon arriving at the collider, he used Glass to communicate wirelessly via the Internet with a high school class that his brother, Ryan, teaches at South Christina High School in Grand Rapids, Mich.

On his bicycle ride inside the collider, Vanden Heuvel showed the class in Michigan everything he was seeing at that moment. During the tour, Vanden Heuvel pedaled the bicycle along a narrow pathway where the collider is located so he could move to different parts of the facility. “Fewer people have ridden a bike here than have climbed Mount Everest,” he told the class during this tour.

In August, Street View took online visitors into some of the world’s most intriguing zoos and wildlife parks for the first time, giving viewers the chance to see a wide assortment of wild animals from around the world right on their own computers and mobile devices.

In July, Google Street View cameras captured fun images inside the Harry Potter Studio in London to give viewers an inside tour of the world of the popular book and movie character. The images cover a portion of the inner sanctum of the Warner Bros. Studio Tour, where the sets and scenery from the beloved Harry Potter films are on display for visitors in real life, from the inside of The Great Hall to the oft-seen cobblestones of Diagon Alley, where Harry and his friends began their adventures.

In June, Google unveiled the collection’s first-ever photographic contributions taken in the Arab world and from the top of the world’s tallest skyscraper, Burj Khalifa in Dubai, United Arab Emirates. The images at Burj Khalifa allow online visitors to get a taste of what it is like to stand on top the tallest building in the world, according to Google. This is the first time Google has captured skyscraper images using Street View.