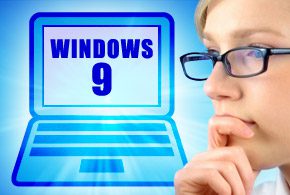 Screenshots of a technical preview of Microsoft’s Windows 9 operating system have surfaced online, courtesy of two German Websites, Computer Base and WinFuture. Notably, one of the screenshots seems to confirm that the OS update, code-named “Threshold,” will ship with more desktop-friendly features than its predecessor and mark a break from the numbering scheme that debuted with Windows 7.

A shot of the System view, familiar to PC enthusiasts and anyone who has explored the Windows control panel, lists just “Windows Technical Preview” under the Windows edition section, lending weight to rumors that Microsoft is dropping version numbers for future releases of the OS. (Prior Windows previews explicitly displayed the intended OS version.) Microsoft is also rumored to be considering a similar change for Windows Phone by not only dropping version numbers but also the “Phone” part.

However Microsoft decides to brand the OS, it will include a new Start menu that blends elements from Windows 8.x’s tiled interface and the traditional Start experience. The left side of the menu generates a familiar list of apps, folder destinations and a search bar, while the right side is filled with tiles to apps such as Skype, OneDrive and the Windows Store. Microsoft teased the revamped Start menu during the Build 2014 developer’s conference in April.

Modern Windows apps (formerly Metro) can run as windowed apps in the desktop mode, a concession to non-touch PCs and users who don’t want to devote all of their on-screen real estate to apps. A smattering of “App Commands” allows mouse users to access common options such as search and print.

Other features of note include a dedicated search icon on the taskbar and support for multiple desktops. The leaked screen captures show configuration and switching options for up to four desktops.

A smartphonelike Notifications panel sprouts from an icon in the system tray in the taskbar. The browser of choice for the preview build is Internet Explorer 11.

A closer examination reveals that Microsoft is working on removing the leftover gloss from older versions of Windows and other mismatching UI elements. Most application and settings windows now more fully adheres to Microsoft’s flat design language.

Expected to debut next year, the next version of the OS will close a lukewarm chapter in the Windows saga.

According to Web analytics firm Net Applications, Windows 8.x (8 and 8.1) has only managed to capture 13 percent of the market for desktop operating systems since it first debuted two years ago. By comparison, Windows 7 remains the top OS with a 51 percent share of the market.