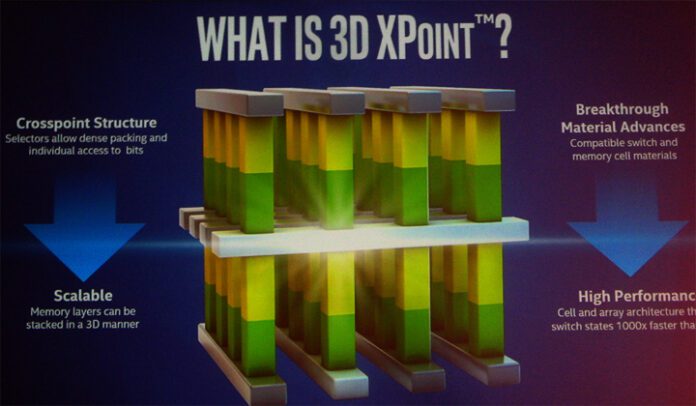 SAN FRANCISCO—A bit of IT history was made July 28 here at The Exploratorium on the waterfront, where Intel and Micron introduced their new baby to the world. They named the child 3D XPoint (pronounced 3D Crosspoint), the first completely new memory form factor since Toshiba brought NAND flash to the market way back in 1989.

The parents of the newborn non-volatile memory, which has been several years in the development womb, claim it is 1,000 times faster than NAND flash, and if that guess is only 10 percent accurate, it’s still pretty fast. Intel and Micron predict a wide range of business benefits and use cases, ranging from speeding up stock markets, scientific research and oil and gas exploration to making more realistic video games—if that indeed is possible.

If these chips work as well as advertised, big data-type systems with large workloads will be lining up to use them. The companies are positioning 3D Xpoint not as a replacement for NAND flash storage or standard random access memory, but as a complement to them to hold so-called “hot” data—the most recent and relevant data—nearer to processors so that it can be accessed faster.

IT in 2015 is nothing if not about speed in all parts of the data center and in the cloud.

Aimed to Solve Storage Bottlenecks, Too

As far as improving data movement from servers to storage, which has been a historic problem in IT, Leszinske noted that the entire industry is moving storage connections from SATA (serial ATA) controllers to solid-state PCIe devices, and that it works hand-in-hand with the capabilities of 3D Xpoint.

“SATA was designed for hard drives 20 years ago, it’s slow,” Leszinske said. “NVMe is a new programming language that runs over PCIe. We (Intel) developed that about four years ago, knowing full well what we were doing in this space. So we were trying to remove the software bottlenecks, because we knew the hardware was going to get much faster.”

Leszinske said that we also can expect to see 3D Xpoint chips in future data center fabrics, “which is where Intel has been putting substantial investment,” he said.

For the record, Intel introduced Peripheral Component Interconnect Express (PCIe) in 2004. It is a computer expansion-card standard based on point-to-point serial links rather than a shared parallel bus architecture, and replaces the older PCI, PCI-X and AGP standards.

HPC Will Get It First, But Enterprise Won’t Be Far Behind

Processors will require these high speeds to process data sets for workloads like the ones noted above, as well as financial fraud detection, security risk assessments, and even real-time disease tracking, Micron CEO Mark Durcan said.

3D XPoint is slated to ship in sample quantities later in 2015 and become available for installation in devices in 2016.

Naturally, this rip-roaring new memory tech will be ushered immediately into high-performance computing shops first—the invariable first users of most new big-data IT. But because it’s so promising, larger enterprises on the next rung below those other use cases also are expected to take an early look at it.

“I see this getting into the enterprise, specifically in environments that use in-memory databases,” analyst Patrick Moorhead of Moor Insights & Strategies told eWEEK. “SAP, SAP HANA, Oracle—wherever there’s a motivation to decrease the cost versus DRAM, or if you’re trying to get the highest performance, you use this type of memory instead of classic NAND flash memory, that you would use in an SSD (solid-state disk).

A key selling point about 3DXPoint is that it does not require an operating system rewrite, Moorhead said, for some of the different IT in data centers to take full advantage of it.

“Generally, the deployment of these will be simple because what they’ve done is—even though it’s a brand-new memory architecture—they’ve made it look like to the outside world like either NAND flash or DRAM. For lack of a better term, it ‘talks’ both languages,” Moorhead said.

“Now if you’re buying from an enterprise vendor, say from HP or Dell, you’re going to have to make sure whether these are qualified. But my belief is that because there’s such a revenue opportunity here for people to buy more gear, I expect those vendors to jump on this pretty quickly. And they’ve (Intel and Micron) probably been working with these vendors for years anyway.

“The only question is: Who’s going to come out with it first, and in a productizable and manufacturable way?”

eWEEK will keep a close eye on this development.