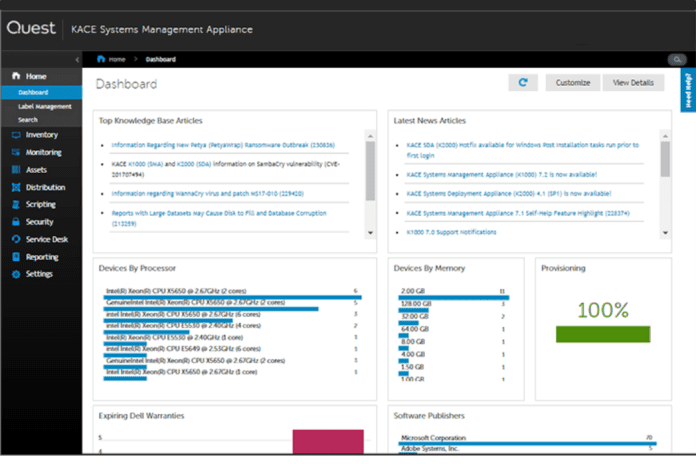 KACE SMA 9.0, which is also known as the K1000, adds new automated service desk ticketing capabilities to help speed up remediation and update processes. Software license asset management has also been updated in the new release to help organizations identify what software is being used and what isn’t, to help improve license efficiency.

In addition, SMA 9.0 benefits from the addition of two-factor authentication (2FA) to help further secure system installation and updates.

“Two-factor authentication has been added to provide an extra layer of security to KACE SMA for peace of mind,” Ken Galvin, senior product manager at Quest Software, told eWEEK. “With 2FA, stronger security can be provided to users logging into the appliance.”

Kace was founded in 2003 and was acquired by Dell in February 2010. Kace was subsequently spun out as part of the Dell Software Group sale in November 2016 to become part of Quest Software. Originally focused on hardware appliances that provide systems management capabilities, Kace in recent years has transitioned away from delivering a physical appliance.

“The KACE SMA is now sold only as a virtual appliance,” Galvin said. “Existing hardware appliance customers were notified last year and continue to be supported as per their maintenance agreement.”

Kace SMA is what Quest refers to as an asset management solution, helping provision, manage, service and secure endpoint environments. The updated SMA 9.0 release includes a SysTray application for Windows and macOS users on the endpoint that easily shows users the connection status of their system to Kace SMA. The SysTray also enables users and administrators to force a system inventory scan as well.

Also added to SMA 9.0 is the User Authentication Log, which keeps track of the users who log in to the appliance, providing an additional layer of security for the system, according to Galvin.

“The OVAL standard that is also part of the SCAP specification contains the details on the set of tests that are needed to successfully test against each benchmark,” Galvin said. “The configuration identifiers within the XCCDF benchmarks combined with the OVAL tests allow users to map results to FDCC compliance requirements.”

Historically Kace SMA has enabled systems management on largely x86 based systems, but with the new 9.0 update, it is expanding to support the rapidly growing world of internet of things (IoT) devices as well.

In addition to the Windows and macOS agents, Kace SMA 9.0 supports an agent that will run on the Raspberry Pi with the Raspbian Linux operating system. The Raspberry Pi is a small, Arm-based board that is increasingly being used as the basis for embedded and IoT deployments.

“IoT devices are moving away from proprietary RTOS [Real-Time Operating System]-based devices and toward Android and lightweight Linux distros to power them,” Galvin said.